I just wanted to share a couple pictures of the dollhouse I made my daughter for Christmas. I haven't seen any other pictures of the project completed and I hope it might be helpful to someone else looking for ideas.

This is the first project I have done. I added a 3rd floor to the plans so that we could have a large dollhouse family living there. I also added two half walls on the bottom floor for support and wall space.

I had the straight cuts done at the store and and did most of the other cutting with a borrowed jigsaw. After attempting the the 30 degree cuts at the roof peak with the jigsaw, and spending a couple of hours sanding, I took it to a friend who is a contractor and he cleaned it up on his miter saw. I believe the roof ended up about 1/2 in shorter than in the plans...thank goodness for the extra overhang!

Forums
Show Off Your Work Here

Your dollhouse took my breath away!

Awesome present for your daughter! I just imagine she loved it! Well done!

This dollhouse is awesome!!! Great job! 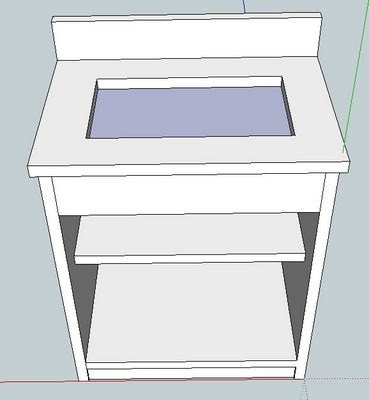 Really love it! I love the pop of color on the roof! :) (and the doll family seems to have pretty stylish furniture :)