This simple little play table with storage has got to be one of my favs. It's perfect for homeschooling, crafts, or for bigger kids to do their homework or play games on. Special thanks to one of our readers for the photo! Inspired by Land of Nod's Elementary Table. 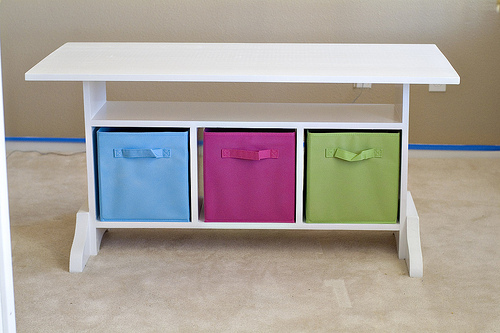 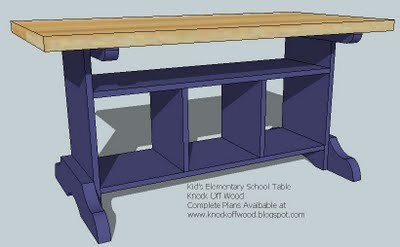 When you are cutting with a jigsaw in multiples, save the scraps to use as a pattern. 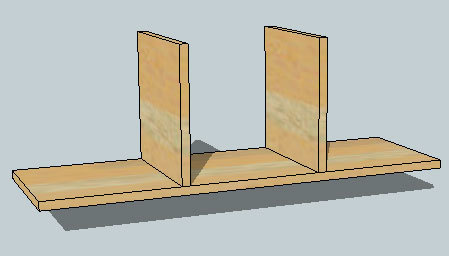 Your table should look like the above table. Now is a good time to check for square. 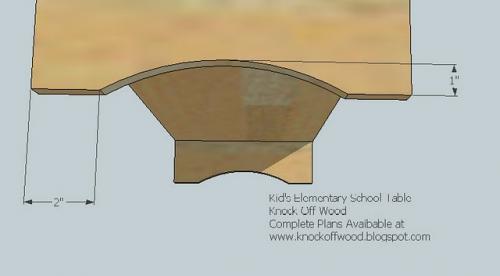 Now take the two pieces C, and cut out an arc, as shown above. Keep you pattern - you will have to cut out one more set for the foot of the table! 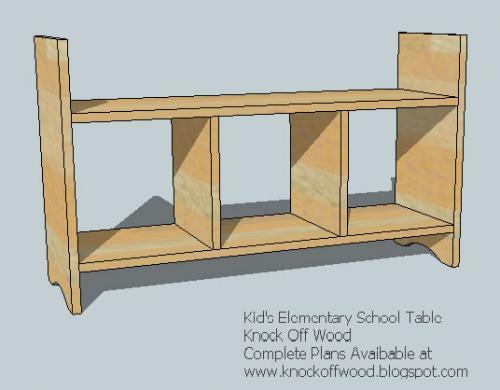 Attach the sides to the table, C, as shown above, using screws to screw through the sides into both piece of A. The bottom shelf will be 3 1/2" from the bottom of the table. 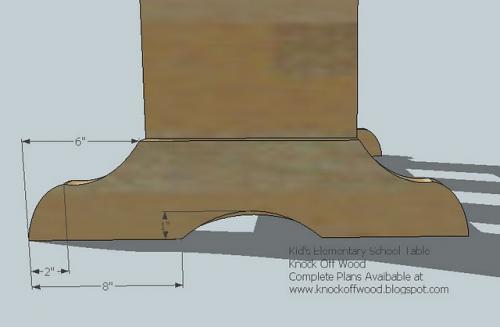 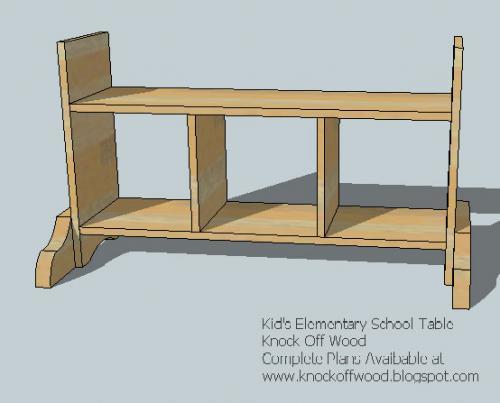 Predrill from the bottom inside of A into the foot, D, and screw the feet on the table. By screwing from the inside, you will hide the screw heads. Make sure you keep the bottom edge of the foot and the table flush. Also, center the foot on the table (there will be a 6" overhang on either side). 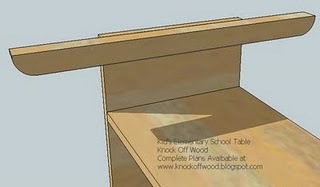 Take the 2x2 pieces, E, and round the edges off, as shown above. Use a jigsaw and then sand down evenly. Predrill and screw through the inside into the side, A, as shown above. 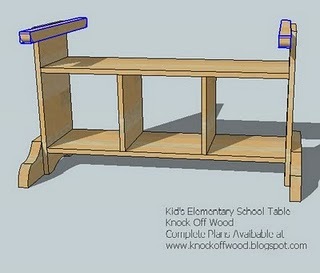 Your table should be looking like the above table. 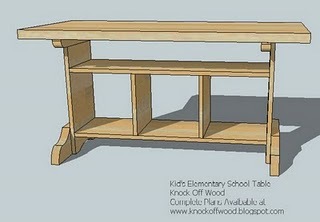 Predrill and screw through the 2x2 tabletop supports, E, into the bottom of the tabletop. This will hide all screws.

Ana, this is beautiful.

Ana, this is beautiful. THANK YOU! I can't wait to build this for my son and fill with presents on Christmas morning!

Charles and Lynn (not verified)

Ana, is there an easy way to

Ana, is there an easy way to add the thing that holds the huge rolls of paper? I can't figure it out, but I am sure you can!

I just built this project in

I just built this project in one day. This was my first knock-off project, and I've never built any furniture like this before.

I found that 2" wood screws work best (8x2 flat Phillips to be exact). My first bump I encountered was the fact that you really need clamps in order to build anything. Thank goodness I had some, but I didn't realize how much you need them. Go ahead and buy the bigger kind. The ones I had were just too short by less than an inch when using it on certain parts of the table.

Next bump was cutting out the arc. I had no idea how to do that and decided that my large dinner plates worked best. You need some kind of a large circular object to trace. Bigger than a large dinner plate would be better. My arc's are slightly higher than the dimensions Ana suggests as my dinner plates weren't wide enough with the top hitting the suggested height and being wide enough at the same time. Probably a lid to a 5 gallon paint bucket would do good (I have no compass).

The two different curve cuts for the feet were challenging, I just marked out the dimensions she had listed and used my dinner plate to draw each curve.

I noticed that my jigsaw skills aren't the best, so one of the arcs on the side support/walls is just ever so slightly higher than the other. That also made my measurements off, let's say the arc was supposed to be 8 inches in from each side, mine ended up being a little bigger because of lack of jig saw skills. But looking at the table, you can't even tell.

Also the wood I purchased was the straightest I could find in Home Depot, however, not straight enough. My finished table is not level. If you put a very heavy object on one end, then it's straightened out. The entire center of the table (before you put on the feet, etc) was square, but bowed boards, even barely bowed will mess up your project. I'm going to look for a different source other than Home Depot/Lowes for furniture making wood. Everything the store had looked curvy.

I haven't screwed the table top on yet because I'm spraying the entire thing white and the top is melamine, which I don't want to spray. I modified the table top supports to be screwed in from the outside table legs, vs. the inside. Much easier for when I screw the table top on as I won't be battling for space with my drill and that first shelf.

Overall a pretty easy project. Just be careful on cutting the arcs/curves with your jig saw, if you are not skilled with it yet. I built this in about 5 hours and am very satisfied with the results and can't wait to build the chairs to go with it!!

Thanks so much for sharing everything your learned! I am about to start on this project tomorrow and am trying to make sure I have all the right supplies. Can you tell me how big of a clamp I should have on hand?

Thanks Ana - I needed some

Thanks Ana - I needed some new clothing racks for my shop but as we haven't long been open, money is tight. I also needed to be able to move the 'racks' around on my own, or store them in the small store room when not in use.

I used this table as the inspiration. I removed the extra shelf (was going to put another hanging rail in it's place, but changed my mind once they were in the shop) and made the bottom shelf go 'through' the side supports about 15cm. I them cut square holes in these and use chocks to hold it all together. I have used small dowel pegs in the same way for the hanging rail.

All up, it took me about 5 hours for 2 of them, but this was broken up into chunks whilst my toddler was sleeping.

Once I had made the first, the second was a breeze.

I was lucky to have some leftover timber for the tops, and paint, which kept the price down. All up, it was less than $100.

I love, love, love them. Thanks so much for the idea!

PS - the hardest part was converting to metric - I gave up and just went with my head (and what was readily available at the hardware store :)

we've got all the goodies in

we've got all the goodies in the garage to build this. my husband is building himself some work horses to get started.

my husband just finished the

my husband just finished the table. it took roughly 3 hours. we need to paint it and treat it and i'll post photo's tomorrow!

thank you for showing this !

thank you for showing this ! love it..plan to make it with whole family...:)

Just revisited this plan, and

Just revisited this plan, and have been thinking about the lego or train table for our new family room. I am now debating this table but with the storage top from the other tables. Any suggestions?

Must I Use a Nailer?

So happy to come across plans for this table. I've had my eye on this style of table from Land of Nod, but haven't been able to shell out the $300+ it would cost.

Does any one know if buying a nailer is absolutely necessary for this project?

We have most of the tools needed, but when I looked up the cost of a nailer at the local hardware store, it was a little more than I wanted to spend.

I was looking forward to making this table so my girls had more space to play before baby #3 came along. I did not make my feet as fancy (I just used 2x4's) due to time constraints, but at 8 months pregnant, I was able to complete this project in one day by myself.

I am looking forward to adapting the plans to make a storage bench to go with the table that will slide in between the feet.

Thanks for the wonderful ideas, and I look forward to making many more projects in the future. 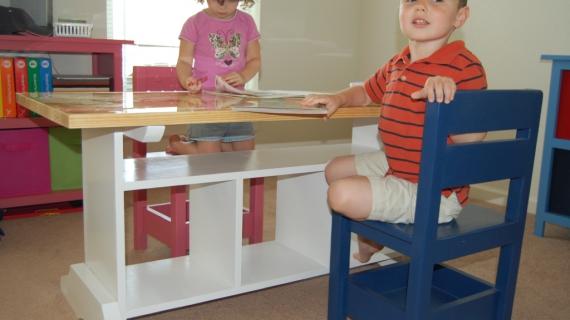 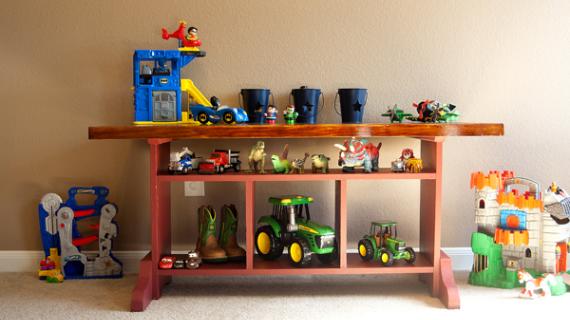 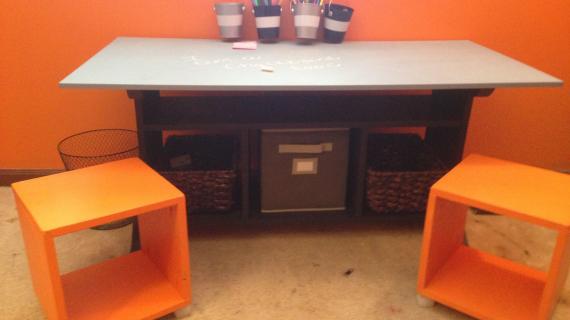 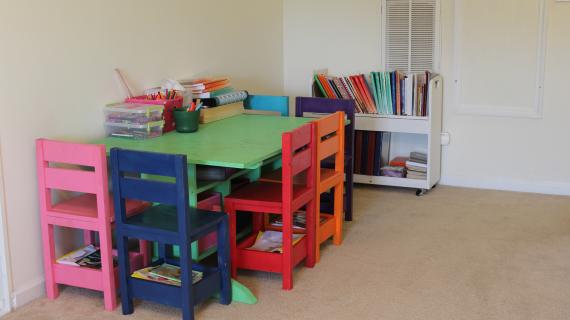