As soon as I saw these plans I knew we had to build it.  We have six grandkids (all 2 and under) and they have a playroom at our house so I wanted something that they could sit on if they are watching TV and also something they could sleep on when they stay the night.  This definitely fits the bill!  This is our second build from Ana's website and it was pretty easy.

We followed the plans exactly.  The only thing we added was a middle board to the back and the arms of the sofa.  I didn't want them to get stuck between the top rails and and the mattress.  We used dowels instead of screws to attach the slats to make it easier to move.  We did not screw the two couches together.  Since the room it is in has thick carpet, it is not moving at all.  The kids love it and it is so sturdy.  They could jump on it or off of it (which they have already done) and we don't have to worry about it breaking.

I sewed the crib sheets and I bought 5 standard sized pillows and some pillow cases.  I so love this sectional! 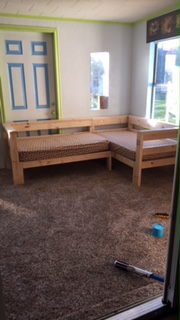 Estimated Time Investment
Day Project (6-9 Hours)
Type of Wood
Construction grade
Finish Used
I intend to paint it. I will be using some leftover Behr paint I have at the house.
Recommended Skill Level
Beginner 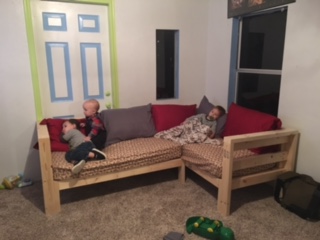 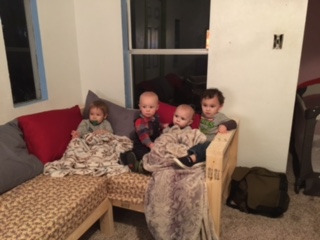 This is great, thanks for sharing!