Build your own master closet system.  This sturdy, freestanding closet can be customized to suit your space and needs.  Free step by step plans from Ana-White.com 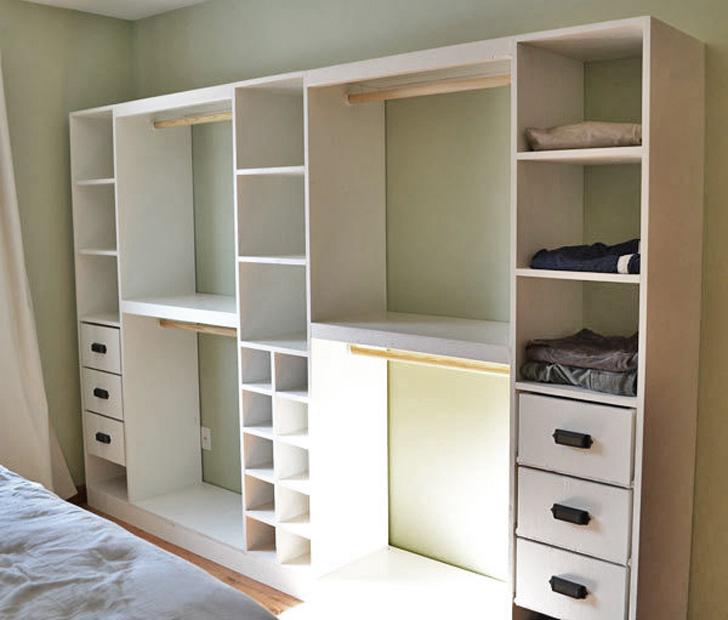 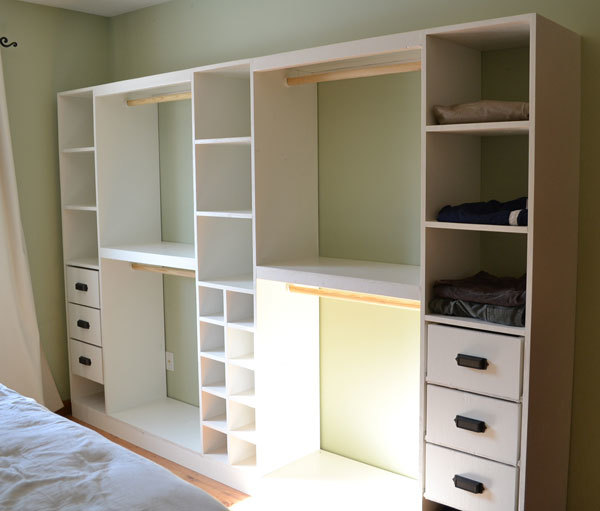 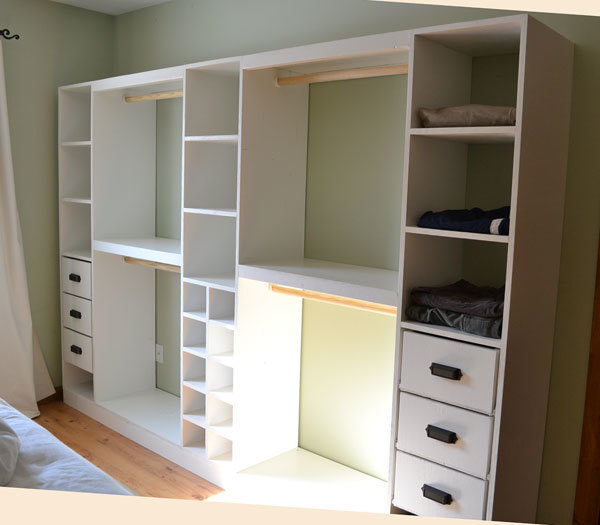 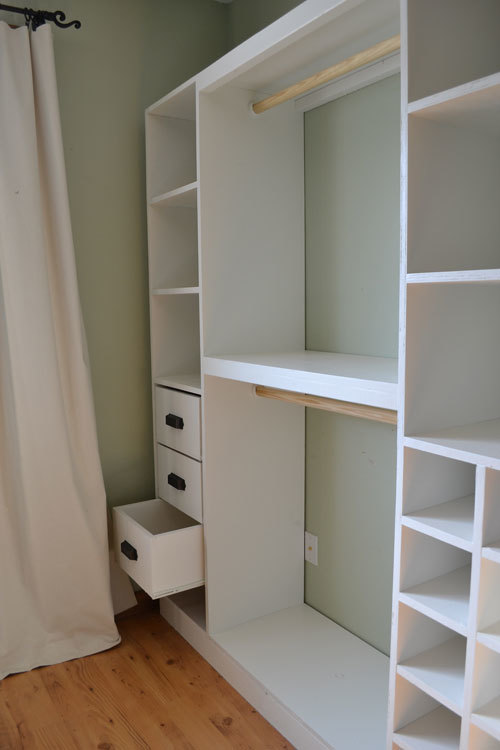 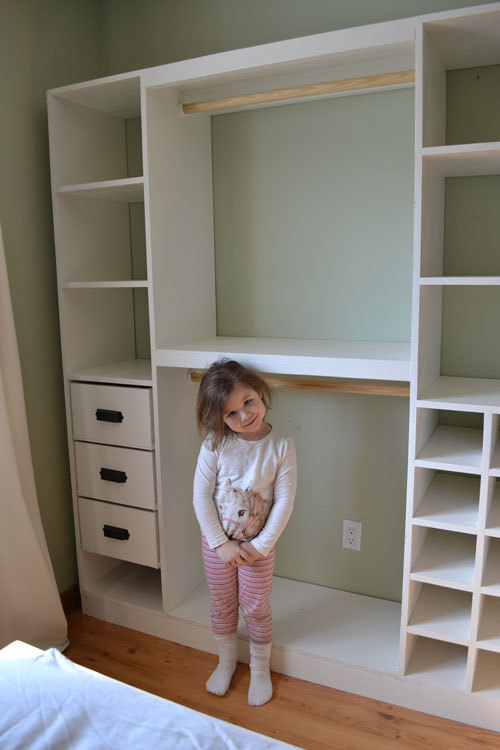 Do you need more closet space?  In our first house, the master closet was only four feet wide.  So I gave the entire closet to my husband and built my own master closet system!

My oldest daughter (now a teenager!) was so proud!

We loved this closet so much, despite moving twice - still use it!  It is very sturdy and helped our family so much over the years.

I used 3/4" plywood to build it, but you can also use Melamine Shelf boards to save time (no finish required or ripping on a table saw!).
I love that you can customize this closet to fit any space.
Thanks so much to everyone who has built it and shared a photo.
Ana
Dimensions 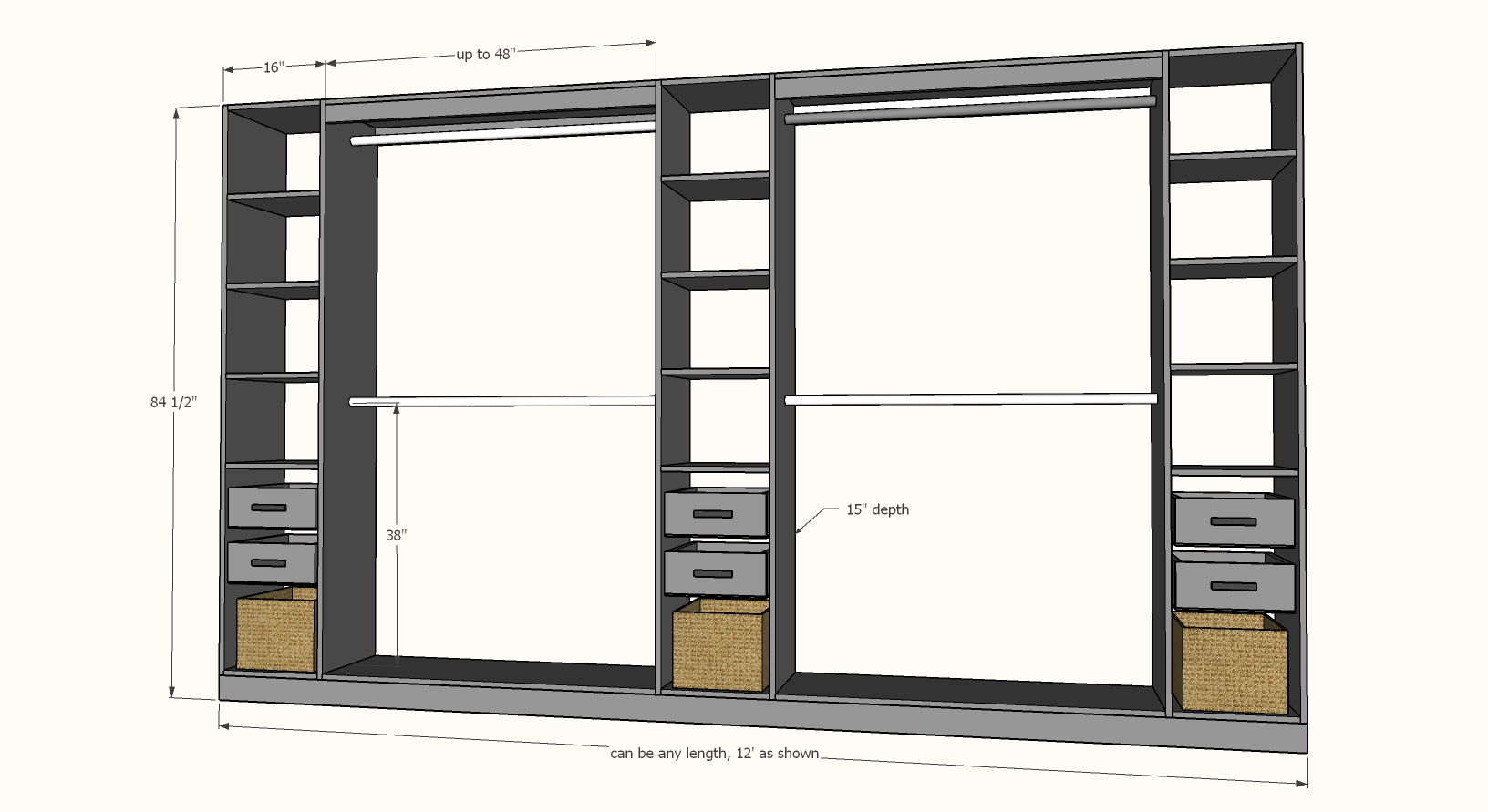 Cuts for Shelves in Between Towers 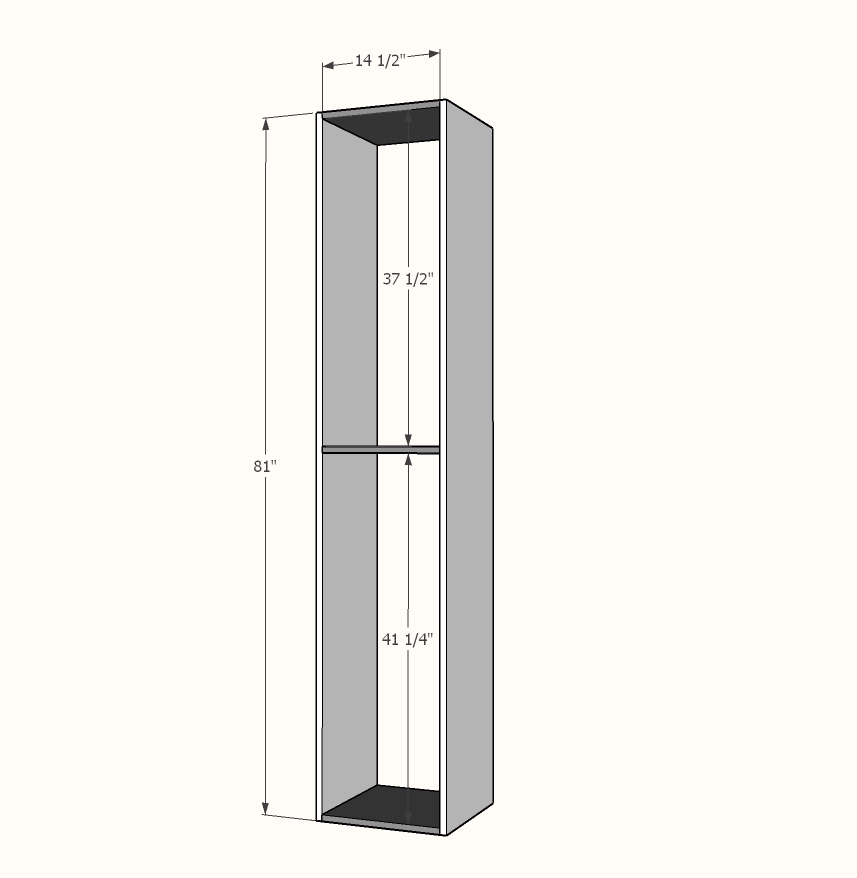 It is important that the center shelf is fixed to keep the closet structural good. 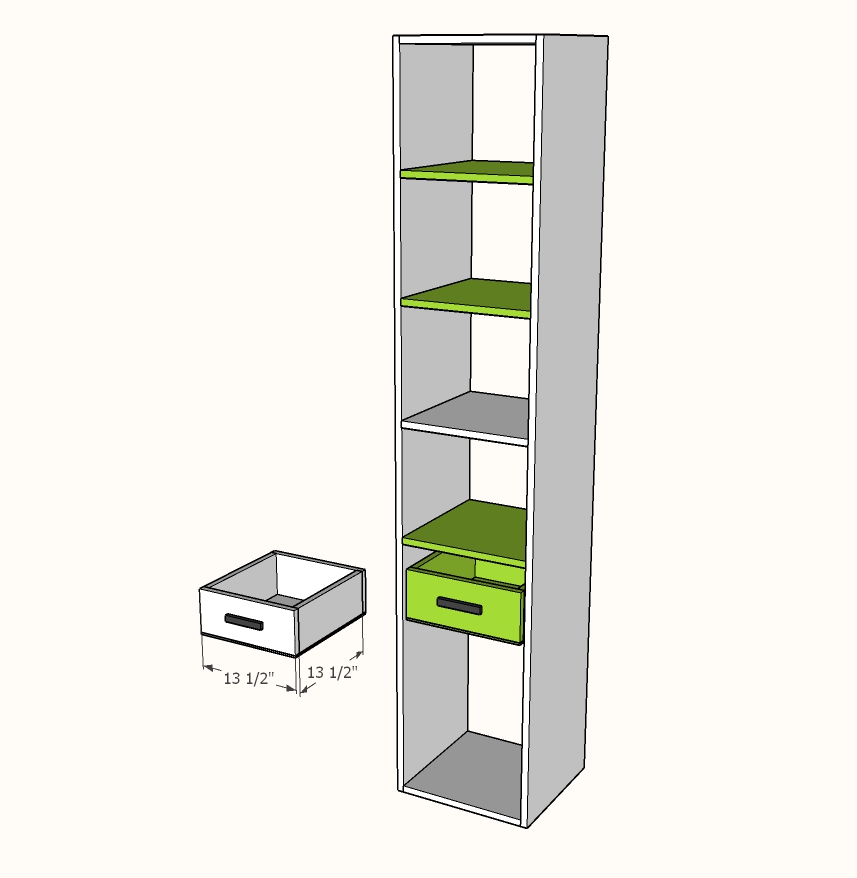 Add additional shelves as desired.  As shown, there is a 12" space between the shelves.

For the drawer boxes, build the box first using the same fastener as you used for building the tower.

TIP: You may wish to finish the towers at this point. 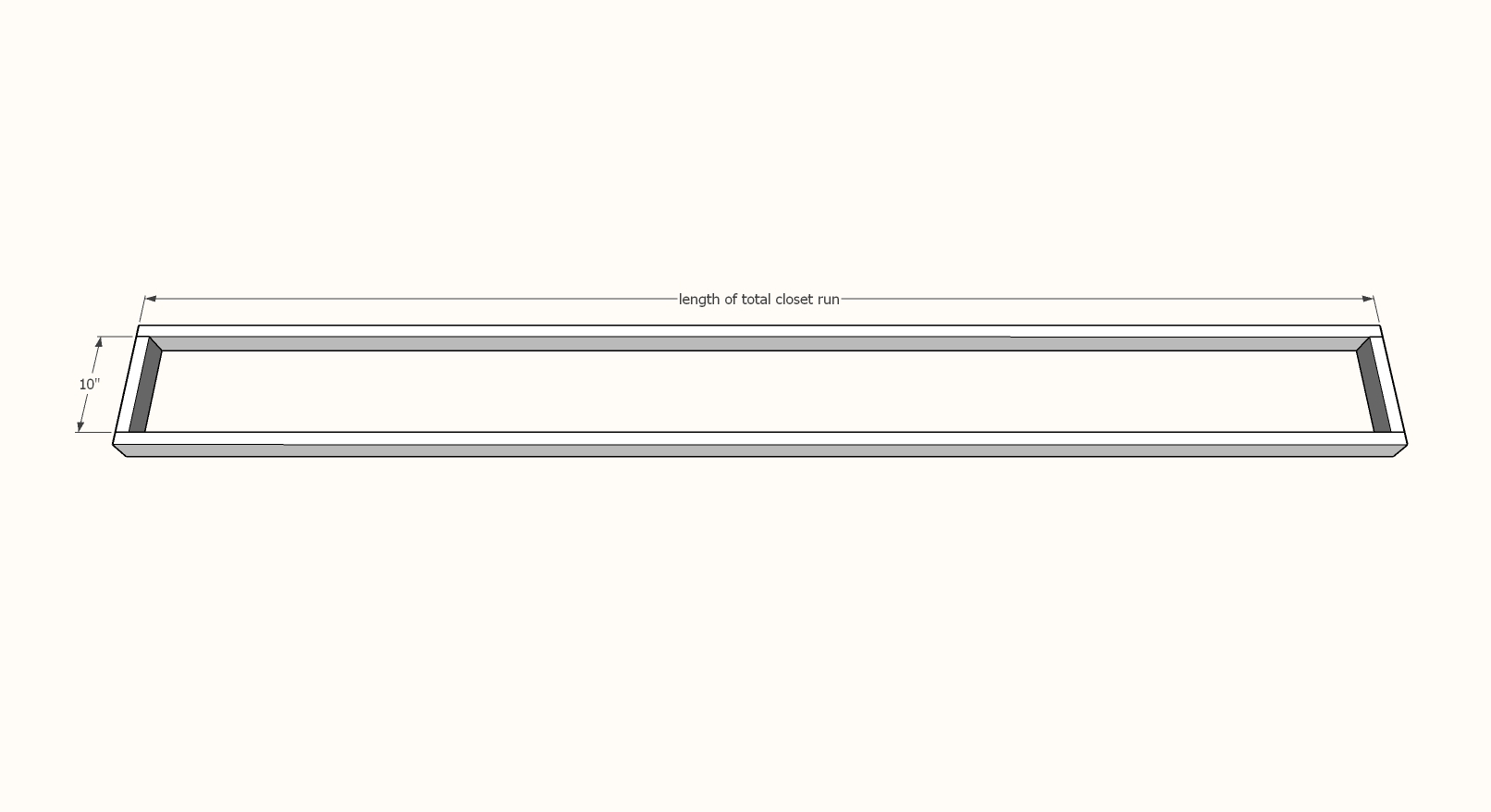 Cut two 2x4s to the entire desired length of your closet.

NOTE: I recommend building the base slightly smaller front to back so that the closet can sit above your base moulding.  If you have taller base moulding, consider using a 2x6 for the base frame to bring your closet up above the base moulding.

TIP: You may wish to finish the base at this point. 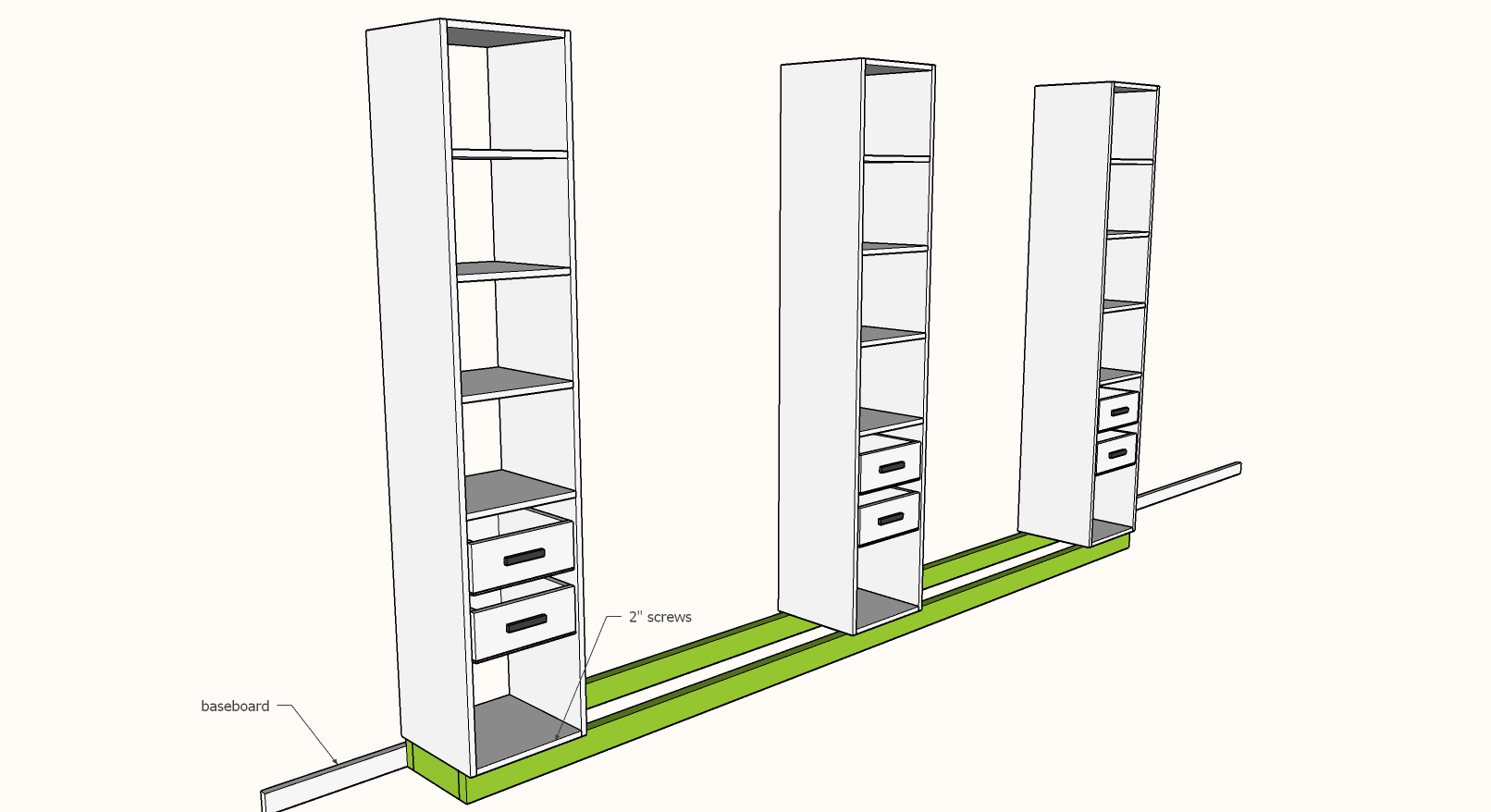 Place base in installation location.

Place the towers on the base, so the towers are flush to the back wall.

Screw towers to the bases. 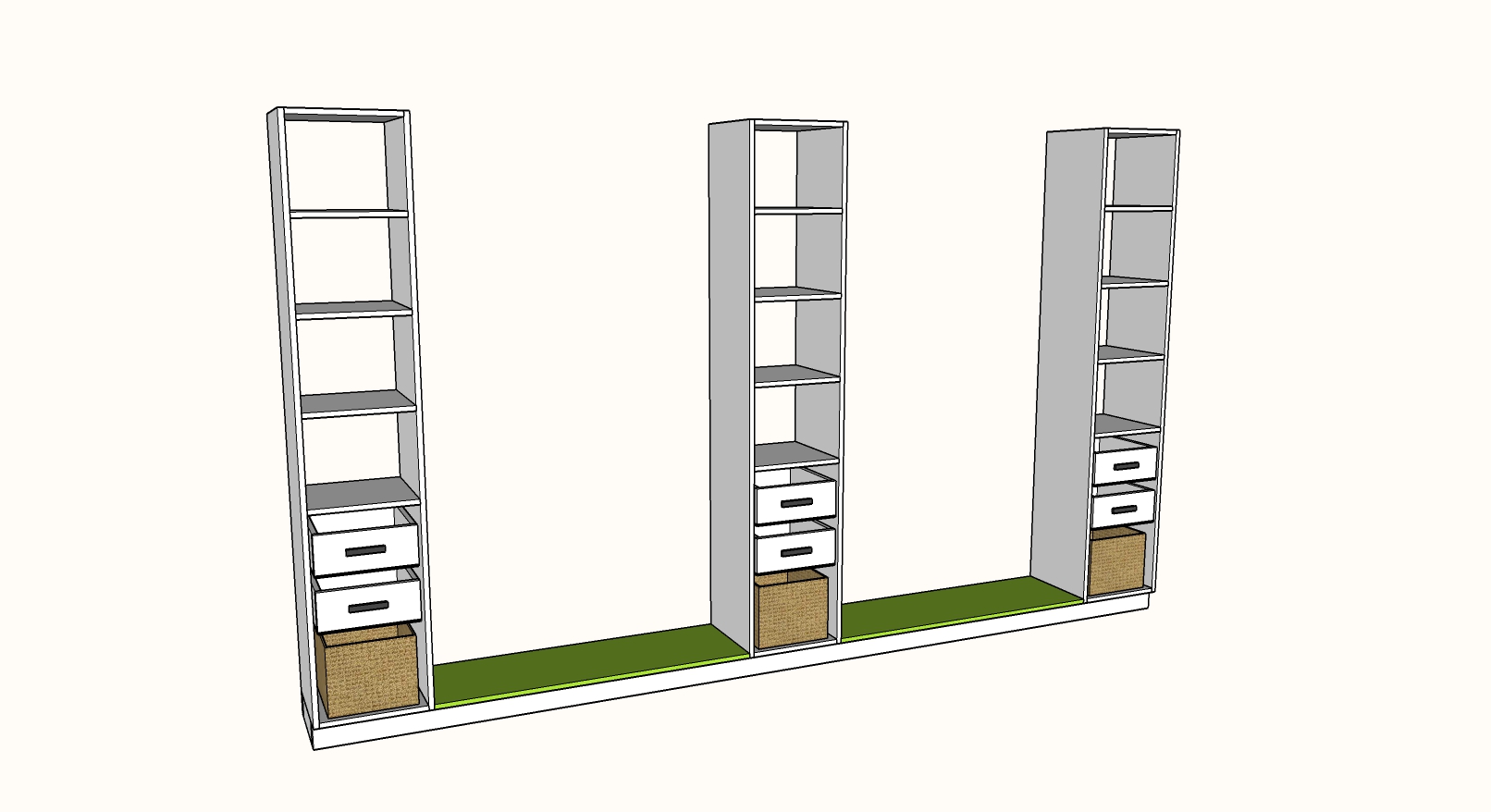 Cut plywood to fit in between towers.

TIP: You may wish to finish the shelves prior to installation.

Attach plywood shelves to fit on the bases. 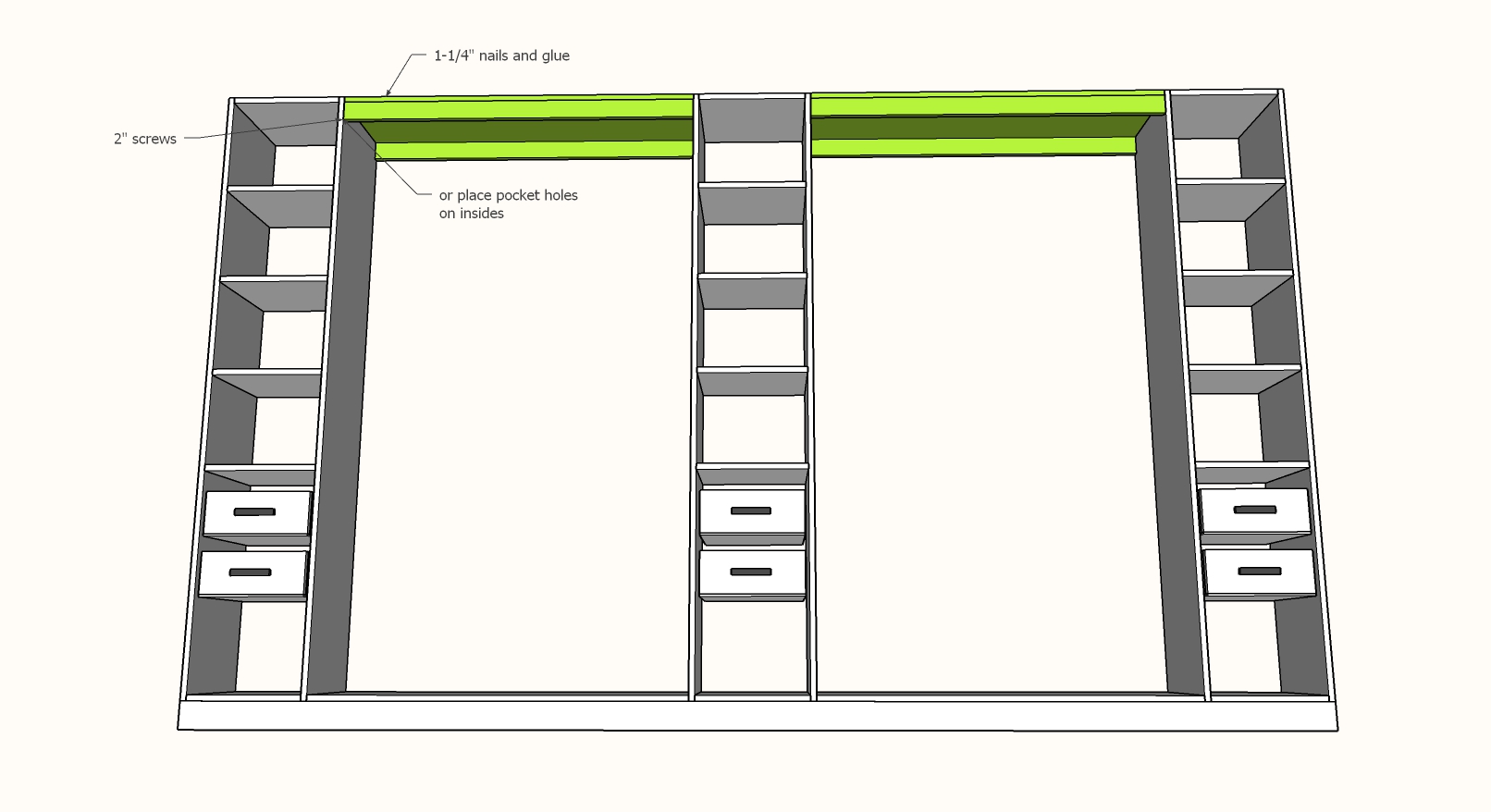 Cut the top shelf boards to width.  Cut the supports from plywood or 1x3s.

Attach shelf to the supports with glue and 1-1/4" brad nails.

Attach the top shelves to the towers. 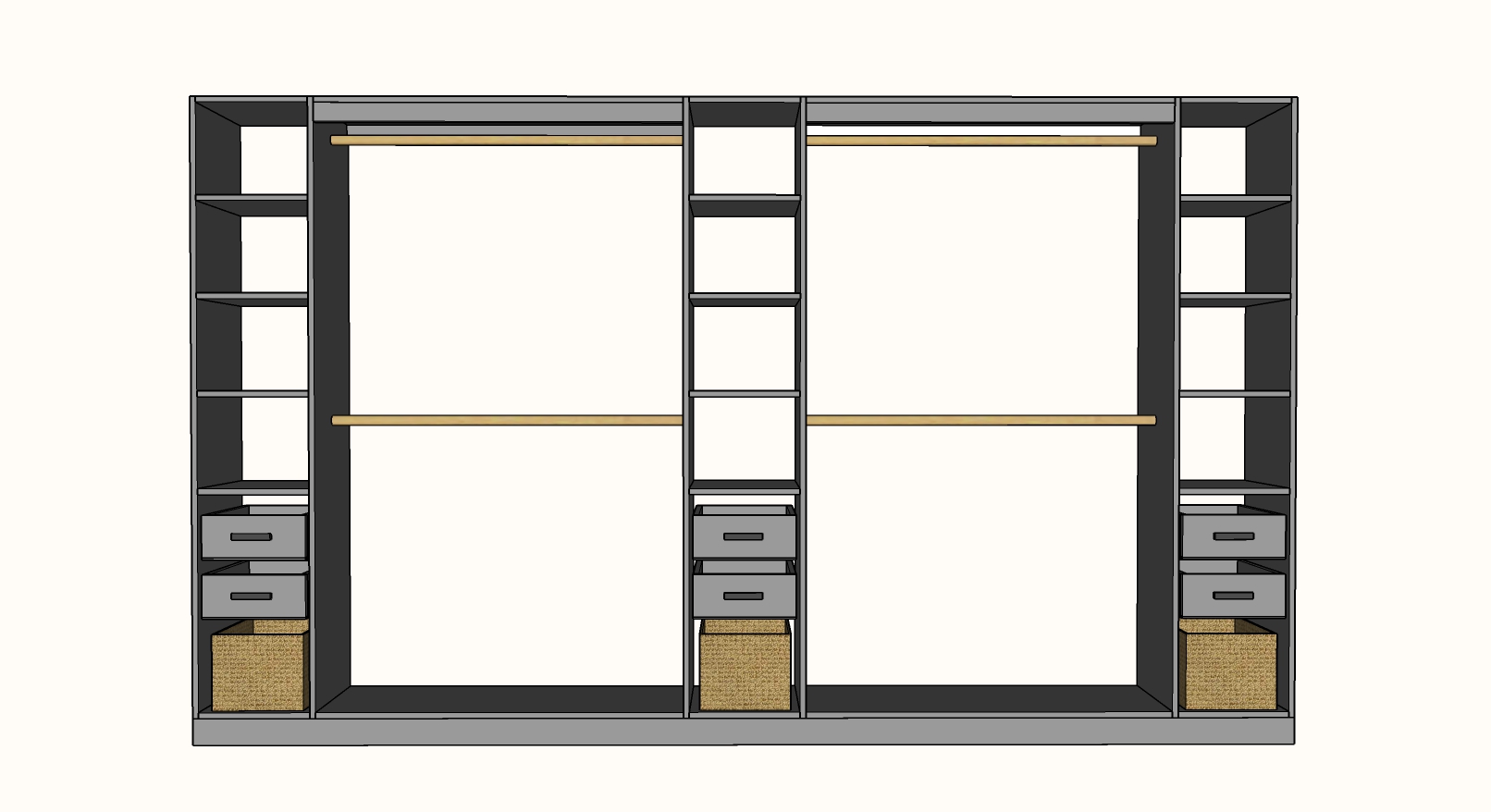 For stained finish: it is recommend to use edge banding on the front of the plywood edges to finish.
Help Improve This Plan

This is my closet using these plans as a starting place

Here are some photos of my closet.  I used these plans as a starting place.  If you look, you will see I essentially built three units, one for each wall, and attached them using "bridges".  I added drawers with soft glide closing slides for the rich feel.  On the main hanging rods, the ones they sell in your local hardware box store and quite expensive (about $30 for an 8' length), so I bought chainlink fence bars, which cost $10 for a 10' length, and took some 0000 steel wool to them, and then polished them.  They look like chrome.  For the corners, I could not find anywhere what I wanted, which was a rod that would mimic the shelf above it, which is two 45 degree turns.  So, I bought a 10' length of 1" electric conduit, and cut it in half and then put two 45 degree bends in each piece.  I did this right in the store with their conduit bender and it took all of like 10 minutes.  Then, when I got them home, I simply cut off the ends to the exact size needed in each corner.  I used a "U" socket on each end, and a hanging loop in the middle.  Both corners cost me less than $20.  The drawer glides were on Amazon, and were $120 for 15 pairs of soft-close glides with the brackets (Get the bracets, as they are not that expensive, and will make installing these glides much much easier.

Another money saving thing I did was the double doors.  The store does not stock double doors, and they must be special ordered, at a cost of almost $275, and would take 4-6 weeks to get.  So instead, i bought two 24" single pre-hing interior doors, and removed the frame on each one where the door would latch.  I removed both headers as well, and used one of the side for the top.  I used a spring loaded ball socket for the less used door, and installed the indent plate for the ball socket where the latch would have gone if used as a side frame for the doorknob (I hope that made sense).  Basically, I put two 24" pre-hung doors together to make one double door.  It cost me $130 and a couple hours labor, to make a very nice double door.

I used sanded birch plywood, all connected with Kreg-Jig screws and wood glue, stained with Minwax Jacobean, and used a satin clear on the main portion and semi-gloss on the drawer fronts for that "rich" look.  The entire closet cost me between $800 - $1,000, with everything, including the plywood, 1x2's, screws, stain, clear, drawer glides, handles, and misc.

I would not have known where to begin without the help on this site, and once I got going, I was able to modify and improvise along the way  to fit my needs.   Thanks.

I guess the cabinet grade plywood edges are pretty smooth and don't need edge banding?  I've never worked with it.  I know using BC sanded plywood I'd have to band the edges to make them acceptable to some folks. 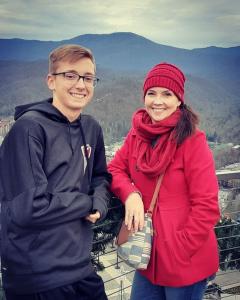 I have been looking for a…

I have been looking for a room divider for my kids. Do you think this would do well on shaggy carpet? We live in an apartment and my kids share a room. This looks like it might work, with some modifications. What do you think?

Love it! Do you have an estimated cost for materials on this one? We are giving it serious consideration and are very new to all this! 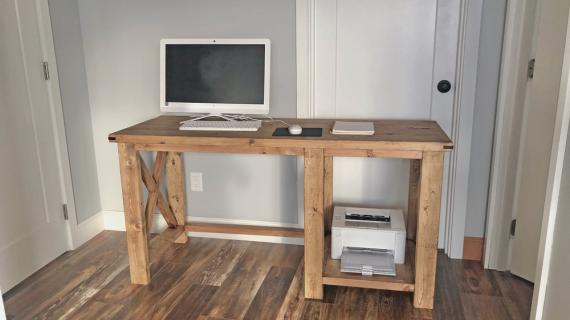 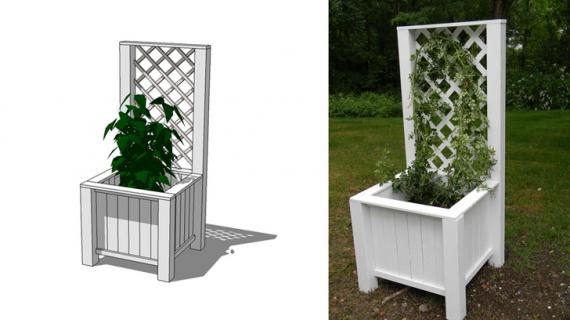 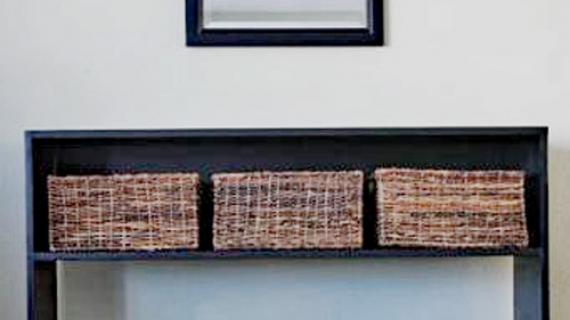 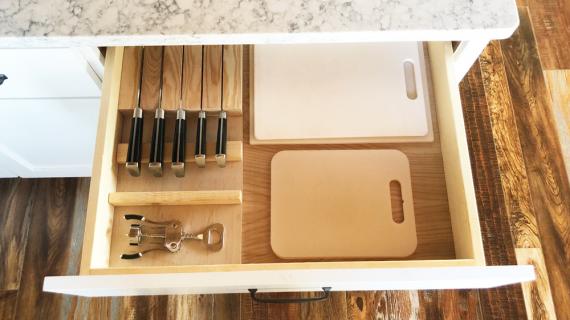