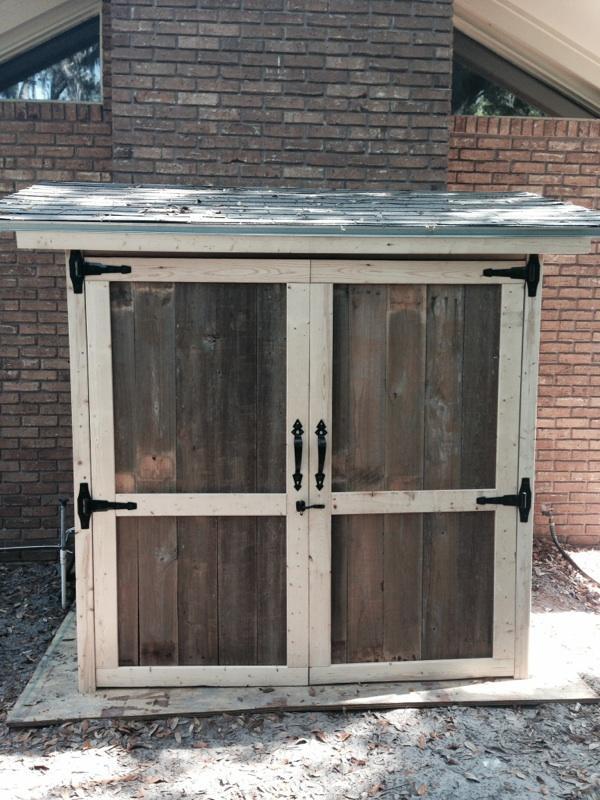 I used to hate woodworking. I majored in engineering in college and my job as a pilot requires me to be a perfectionist, and I could never build anything "right," which frustrated me. Recently, my wife and I found a house that we really liked, but it had not been updated since it was built in 1978, so….it was going to need some work. We bought the house in December 2103 and have been slowly remodeling it. This was our first house that was not new. I realized at some point in this journey that there is absolutely no reason why I could not do much of this myself. I “allowed” myself to mess things knowing that I could mess them up quite a few times vice the cost of hiring a professional. So my DIY journey began. I started by actually getting some of the right tools - aka a Miter Saw (I bought a Hitachi dual bevel compound miter saw off of Craig's list for $100) and suddenly realized that accurate cuts were easy to make using the miter saw vice my circular saw (sans a saw guide – I did not know about that concept until recently). I have watched hundreds of youtube videos and read numerous books over the past few months, gained a ton of knowledge and am actually becoming quite proficient, even to my perfectionist eyes, at fixing things around the house – i.e. patching drywall, refinishing doors, building raised garden beds, etc.

Well all of this remodeling has taken up a significant portion of our garage, the homemade paint tent walls are one of the major culprits….so, we needed some more space. I would love to build a detached workshop, but do not have the budget and may not have the space for it. So we looked at sheds at the big box stores and they looked horrible and there was no way that was going to be an option. Then I looked at the garage again, and my wife and I were almost on the verge of buying one, accepting its ugliness for 2 years and then trying to sell it on the internet since we needed some more space and wanted to get our garden tools on the same side of the fence as our raised garden beds A couple of weeks prior this though, I had found Ana’s site and liked some of the furniture she had on it, but had regulated it to the “later” pile since we already had a ton of furniture and I was more worried about closet shelves then a new bookcase. Fortunately, I had the foresight to send it to my wife and told her to view it, because it looked cool. Well, while she was killing some time on a hold one day, she stumbled upon the outdoor shed design and sent it to me on a Wednesday night. We talked about it and even though we had “other” remodeling plans that weekend, I dropped everything a decided to build it.

Cedar fence pickets are virtually impossible to find in Florida. Finding Cedar 2x6s and 4x4s for our raised garden was difficult and the fence pickets proved to be impossible in 2 days. The big box stores (Orange and Blue) do not sell them in Fl, but Cypress seems to be the wood of choice (for natural rot resistance, etc). New Cypress fence pickets are difficult to find (I actually did not find any), but reclaimed ones are easy. So off to the fencing store I went on my way home from work the next day. I bought 7 panels of reclaimed fencing for $35 and took them home. Once I looked at them, I started to wonder if I had lost my mind, because they were going to require a ton of work and sorting to make them usable. I felt pot committed though, since I had them and no real idea what to do with them if I did not use them. Thus, I began to strip the pickets off. I sorted through them - long ones for the front and back vice short ones for the sides – and began sizing them. It turned out to take forever to utilize the reclaimed wood – since I had to strip them off the fence panels, sort them, remove the staples and nails, cut them, and finally pressure wash them before I could use them. I finally Pac Man-ed my way through it though. When I build my next shed, I am just going to use treated pine or find new cypress pickets. I literally spent 6-9 hours of time getting the fence pickets ready for use, and have a ton of junk ones leftover (that were cracked, split, rotted, etc) that I need to get rid of and have no idea how.

From there, the build was pretty simple, I ended up using treated pine pickets for the back (since I did not have enough good cypress) and was not willing to drive across town to get 150 more pickets (about 1 in 10 were good enough to use for the door) that I would have spend hours sorting and eventually have to get rid of. I was very hesitant to make all the cuts at once, because I did not trust myself and the plan, but that was never an issue. Overall, I felt the framing was pretty simple. The roof turned out to be a bit of bear to do by myself. I managed to wrangle the plywood on top without help, but the pitch was such that it would not stay up by itself. So if you find yourself doing it by yourself, a hammer will make a decent makeshift stopgap (see picture). I could not have gotten the roof on alone without the use of a friend of mine’s cordless framing nailer, however, the true moral of this story is – GET HELP WHEN YOU ARE ATTACHING THE PLYWOOD TO THE ROOF. Help would have saved me about an hour, but my wife was working and I was alone and unafraid. From there, the roof was pretty easy. I put drip edge all the way around. I put it under the shingles on the front and the sides and over the shingles in the back based on the research that did. Two great youtube videos to help are the “Lowes” one on how to shingle a shed and the “Ask This Old House” one on roofing. I used 3 pieces of 10’ drip edge (actually 4, because I messed one up) and 2 packs of shingles. From there, the doors were easy but tedious and I was done. We mounted ours on top of ¾ in piece of severe weather plywood (aka treated pine) since it was going to be on top of dirt and not concrete. That required some finessing on the doors with the jigsaw since the plywood was not exactly flat. Also, when doing the roof, I was specifically told not to use severe weather plywood. None of the roofing nails were galvanized that I could find so I used just a normal piece of plywood, just like they use on the roof of your house, and it worked great. If you use non-galvanized nails with treated pine, them chemicals will cause the nails to rot. Lastly I used silicone caulk around the aft drip edge to ensure that it did not leak. I used the same latch that Lady Goats and Ana recommended, however, my doors remain open approximately 2-3 inches, despite the fact that the latch is so tight it is difficult to open. I am going to replace the latch with two swing down levers from the top piece of trim when I get back in town. I will post pictures if I remember. I had planned to wait and post this until I stained it, however, that has been delayed by multiple trips out of town over the past two weekends due to work and I was afraid if I did not post I would forget some of the salient points that I learned. 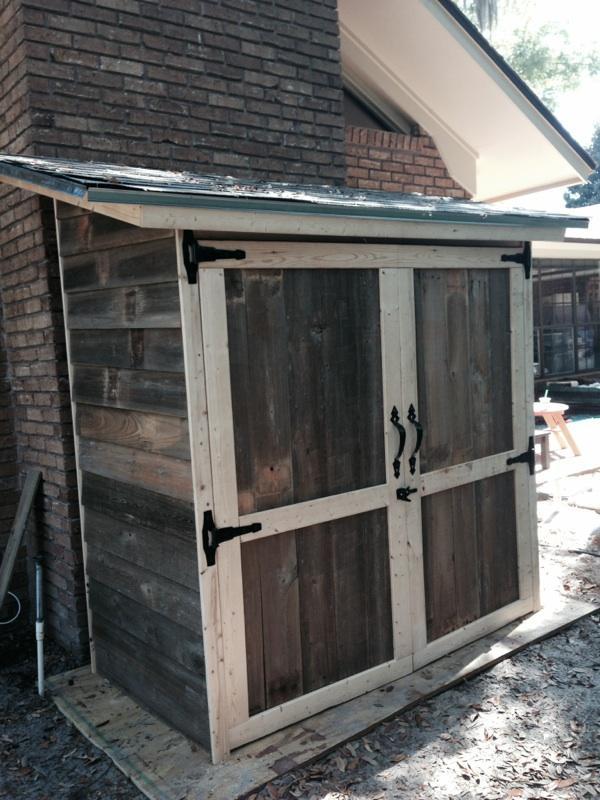 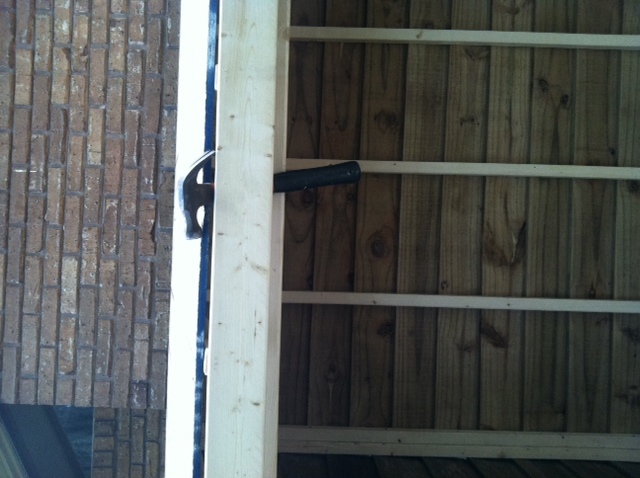 I was restricted on height (by HOA).  It could be no taller than the fence and I have a 6 foot fence...