I finally got the tryde media center built! This is actually the last piece I built but the first one I finished. I've made the rest of the tryde tables and I'll upload those later.

You'll notice that I made some cosmetic modifications to the hutch. I extended the top trim out and wrapped it around the sides. I also embellished the trim at the base of the hutch. Finally with the hutch, I changed the plans to allow me to break it down into smaller pieces to move. The top piece is basically a box with trim. Then the back boards break down into two sections of four boards and the sides come off. Everything is attached by screws so I can undo it later.

I slightly modified the base unit so that the top boards are 48" long [so I could get two from an 8' board] and the breadboard piece is a 2x6 instead of 2x4 to compensate for the lack of width a little. [This modification wasn't planned until I had the base built and realized I bought 8' 2x4s instead of 10' boards.]

Additionally, on all of my tryde pieces, instead of untreated 4x4s I used a 2x4 1x4 2x4 sandwich and modified all the plans to account for the extra width.

The first picture is the unfinished base.
Second is the top piece of the hutch.
Third, the completed unit, unstained.
Fourth is a detailed pictures of the molding that went at the bottom of the sides of the hutch.
Finally, there's the back boards I used, just because I think they look neat.

After finishing, I ran a rope light around the top of the hutch [hidden by the molding], for some ambient overhead lighting. I also did a lot of cord organization on the back side of the base to hide all the cords. 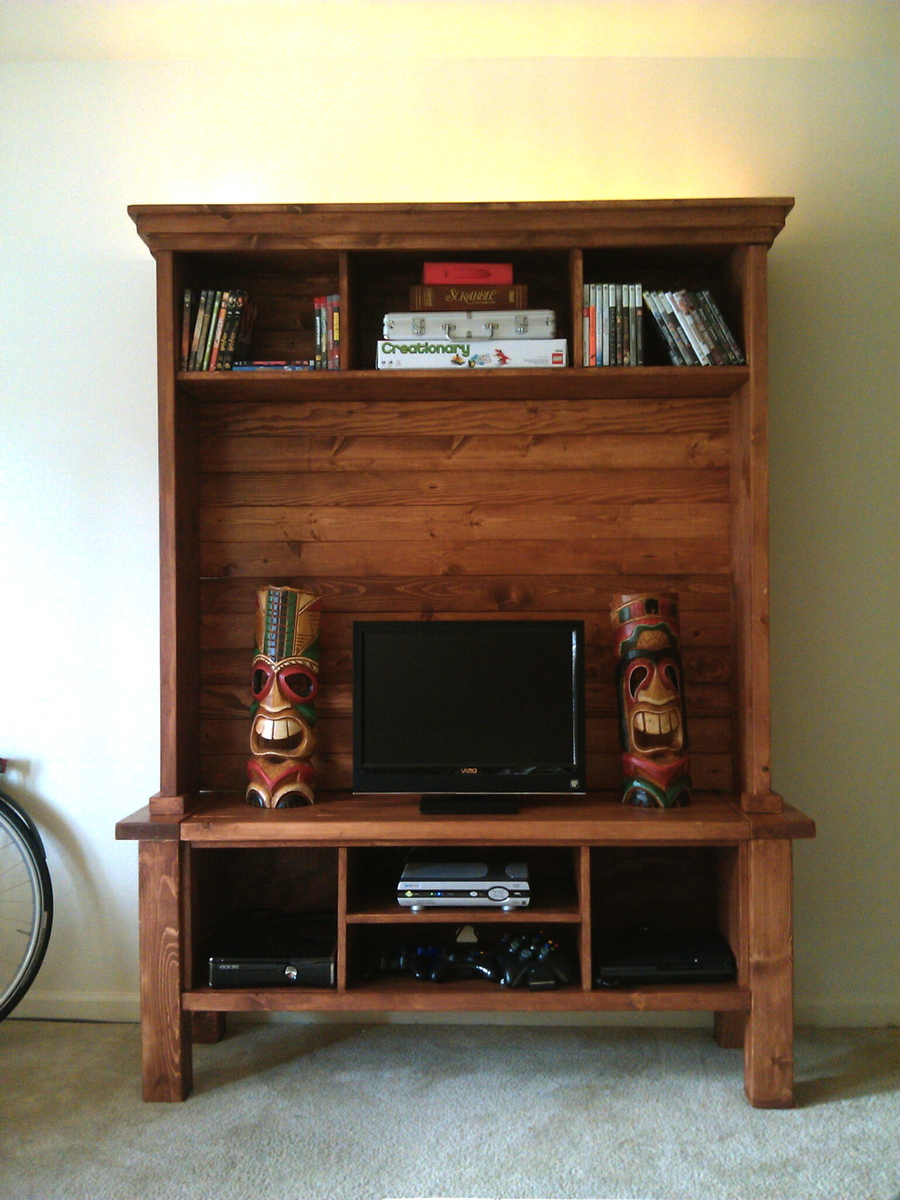 Built from Plan(s)
Tryde Media Console
Tryde Media Console Hutch
Estimated Cost
~150
Estimated Time Investment
Weekend Project (10-20 Hours)
Type of Wood
Pine
Finish Used
I sanded with 120 and 220 grit BEFORE assembling. This made it so much easier to finish. I'd strongly suggest doing this if you can.

The stain is Cabot "English Leather", which is one they have to tint for you at the desk.

I finished with a spray can of shellac. I liked how it came out, but it was too expensive for me. In retrospect I would have just done it right with a can of polyurethane. 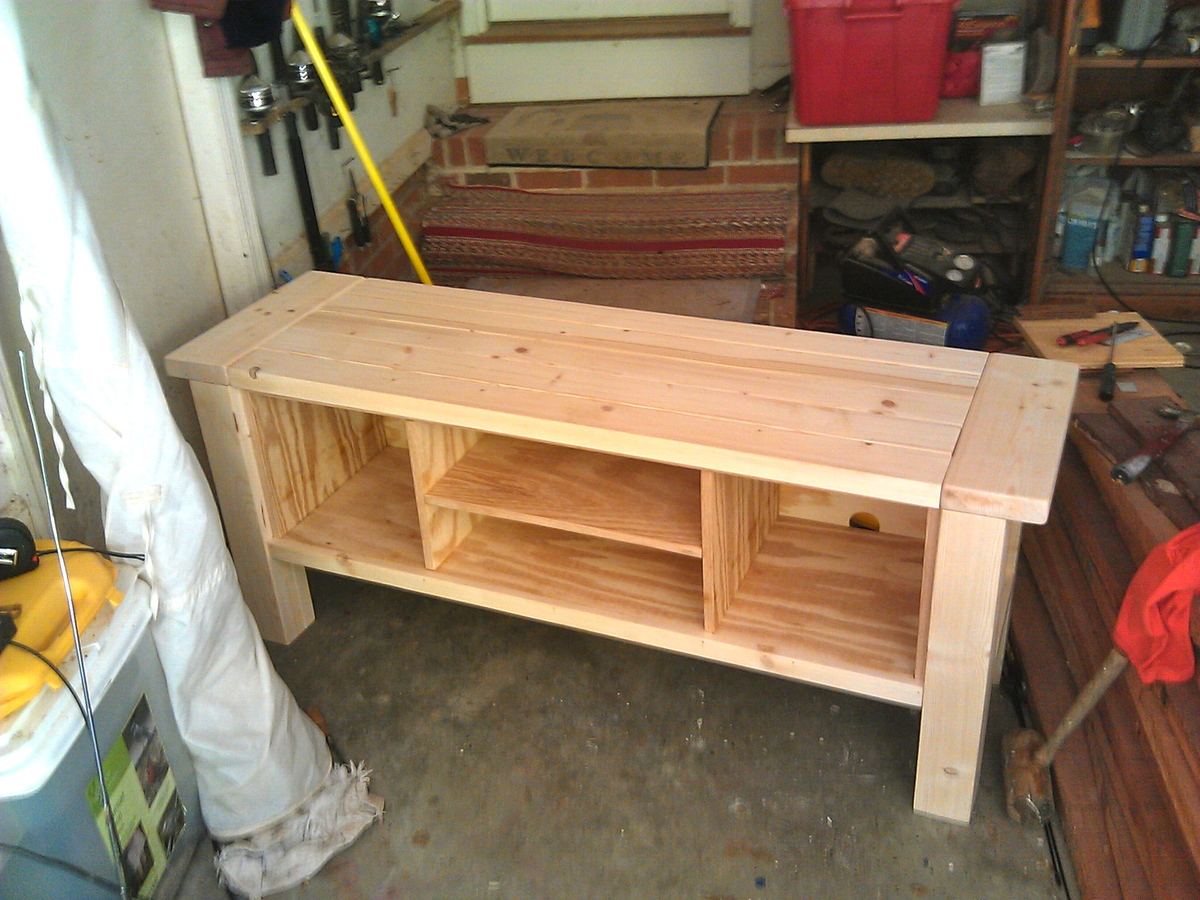 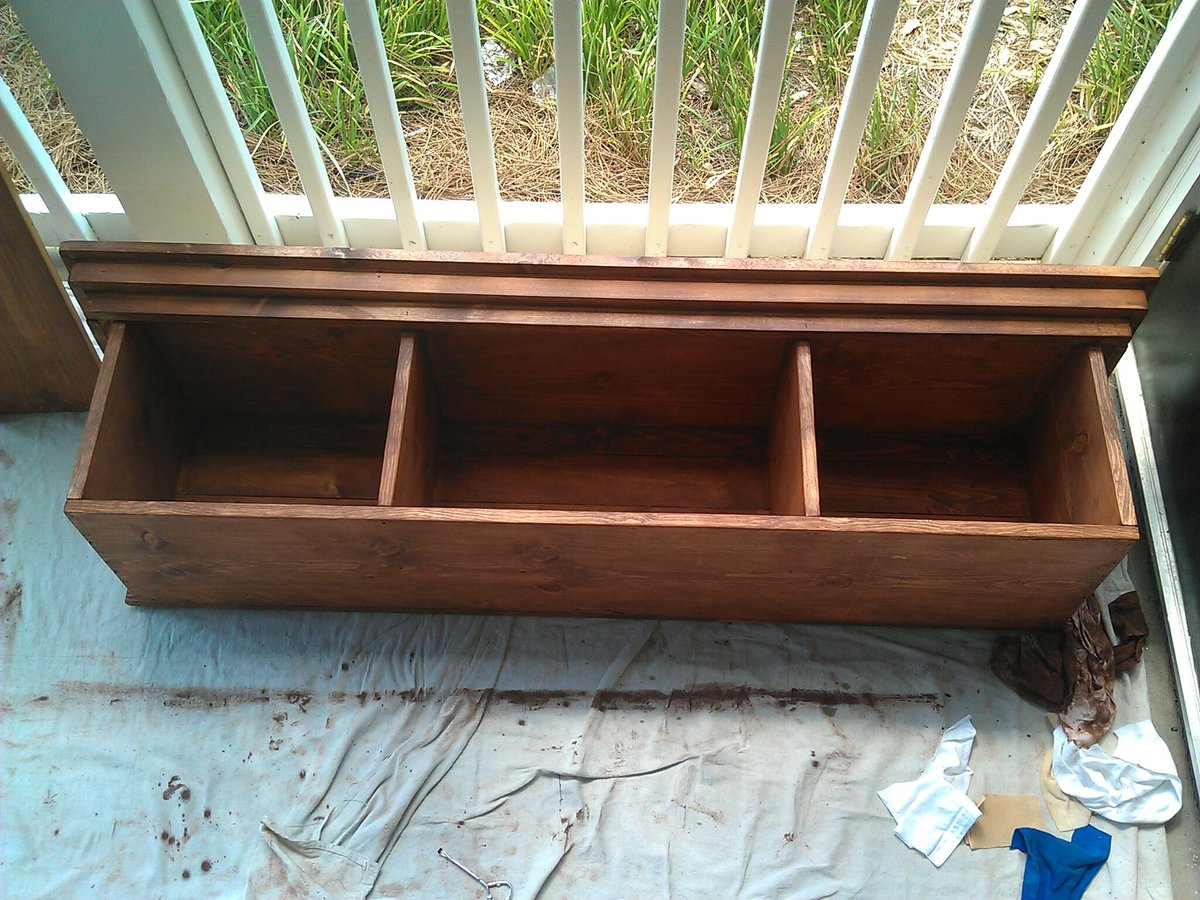 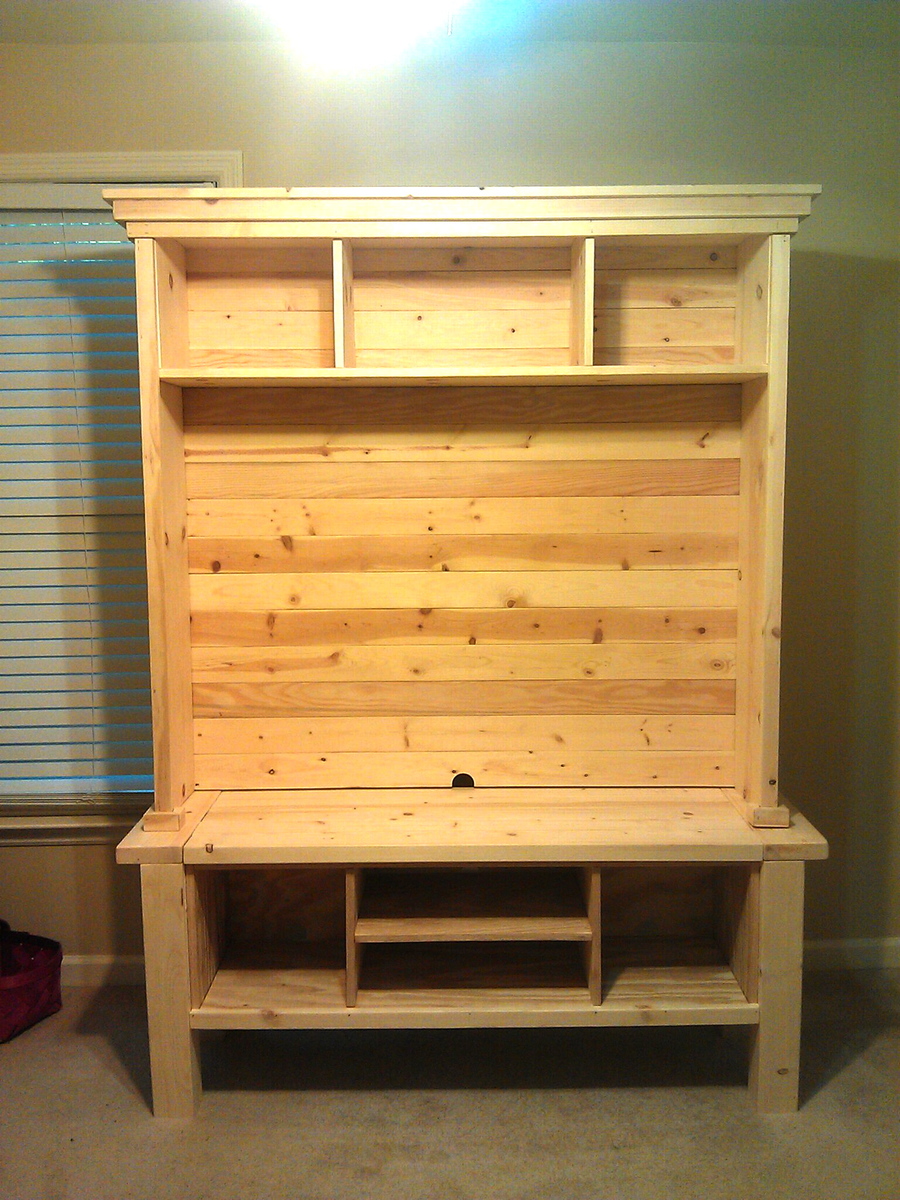 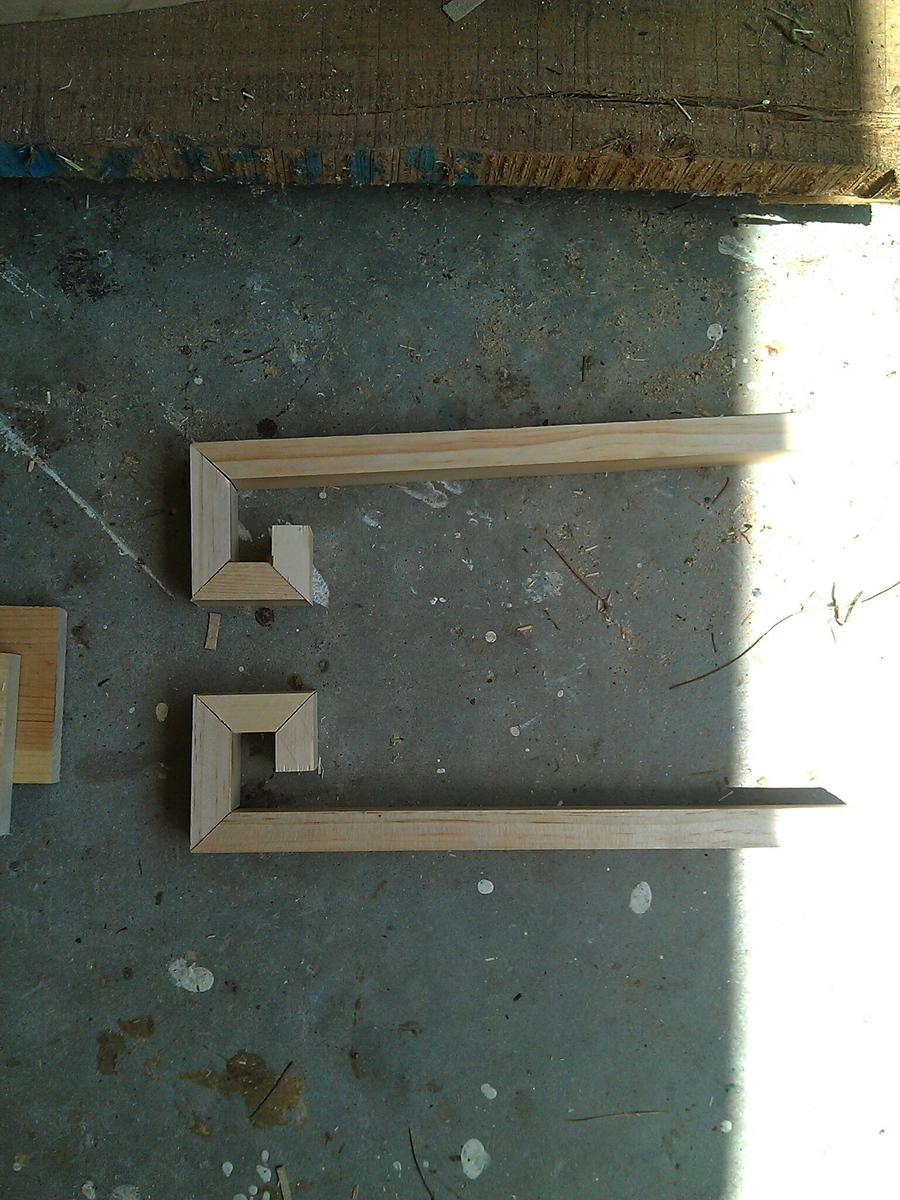 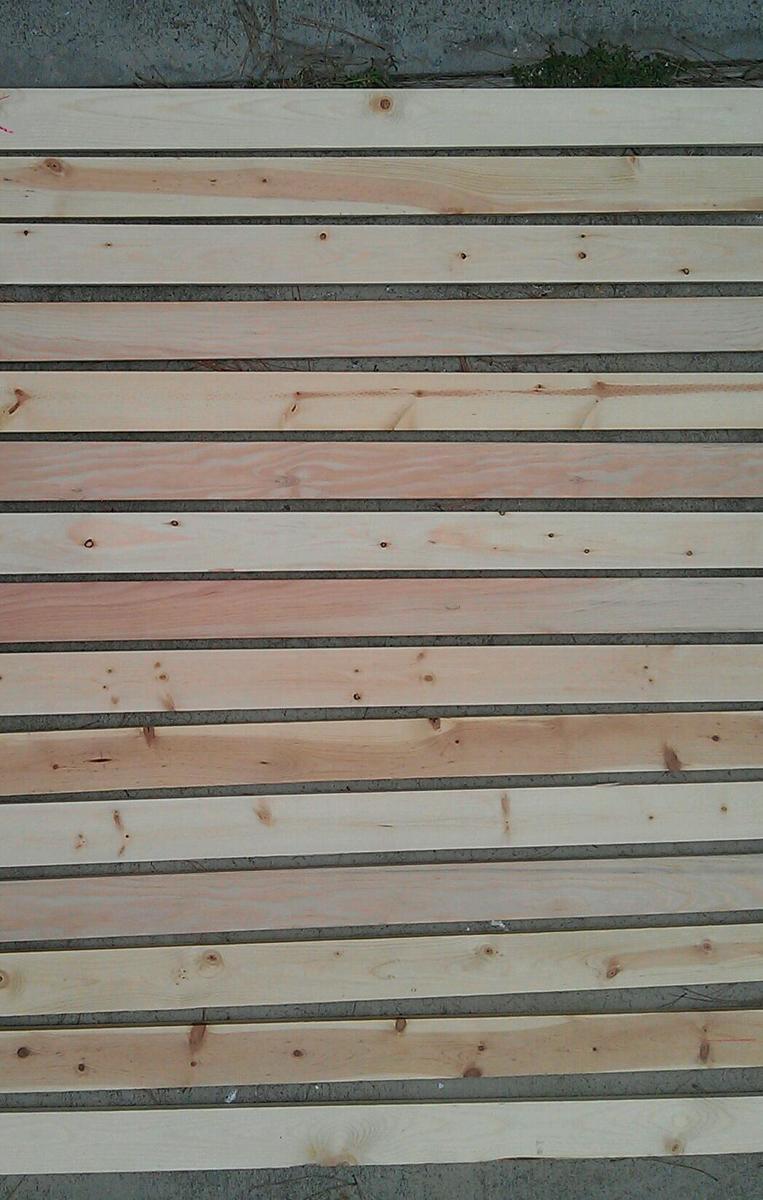