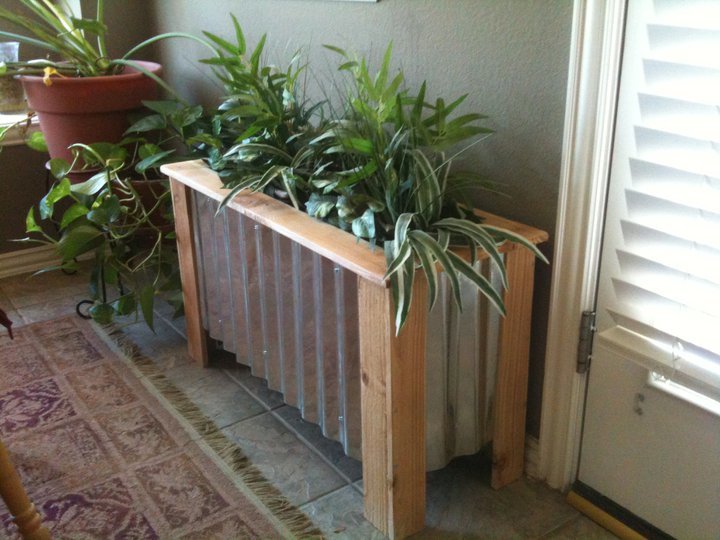 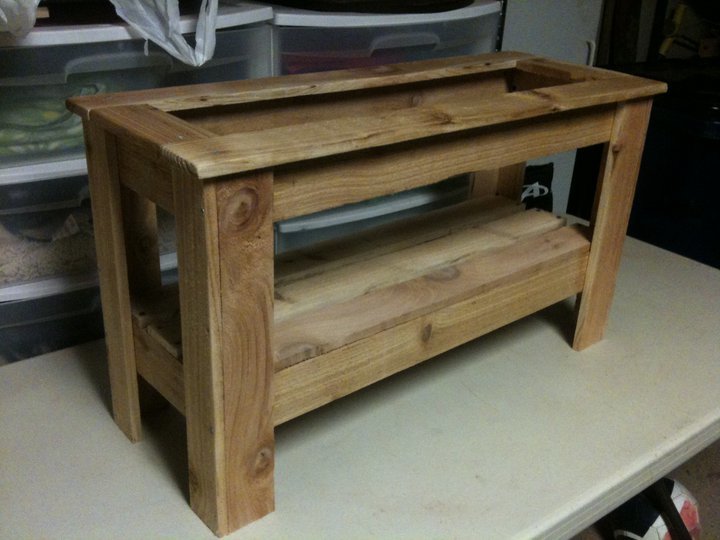 A few weeks back, Ana sent a link to the Fresh Home Magazine website that was featuring her Laundry Basket Cart. I soon found myself checking out other DIY projects that were featured and found this "How to Make A Recycled Planter Box".

I love the wood .vs. metal look and it just so happened, I was in the market for a new planter box (as the one my mother gave me just rotted to pieces.) So here is the picture of my version of this project and how I did it: From Plan: Recycled Planter Box

Estimated Cost: $12 for Lumber $8 for Corrugated Roofing $4 for screws Estimated Time Investment: 4 hours Required Skill Level: Intermediate Type of Wood: Cedar Finish Used: Clear Coat Matt Finish to enrich the wood color Notes: The plan called for rot-resistant wood, like Teak, Redwood or Cedar, which were out of my price range. So, instead, I chose 6x6 Cedar Fence Planks, which were less than $3 a board. I had to use shorter screws because the boards are just over 1/2 thick and when I ripped the boards, they were wider than the plans called for, so I adjusted the plans. Second, the smaller sheet of Corrugated Roofing was not as wide as the plans called for, so I again adjusted the plans down to the new width. Instead of using a metal circular saw blade, I just used a pair of nips and it cut almost like aluminum foil. The website says this is a $100 - $500 project. I made it for just $24. 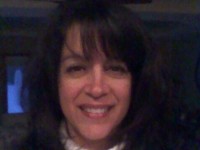 Awesome job and at such a savings! Very smart!

I would really love to make this but the link does not take me to where the plans are. Did a search on the site and still no plans.

I wasn't able to find them…

I wasn't able to find them either. So sad because it is so cute.

In reply to I wasn't able to find them… by bgalva01

The plans have been moved to…

The plans have been moved to here https://www.familyhandyman.com/garden-structures/how-to-build-raised-garden-beds/

In reply to Plans not available by flashfire

The plans were moved to here…

The plans were moved to here https://www.familyhandyman.com/garden-structures/how-to-build-raised-garden-beds/