A beautiful craft table is simply a tabletop supported by bookshelves. Special thanks to Cherish for sharing her beautiful inspiring photos with us. 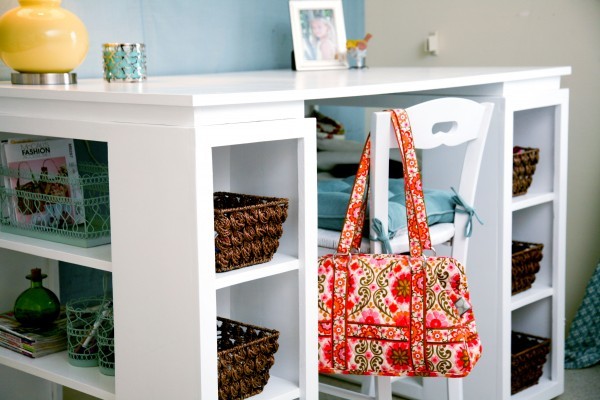 And I'm so sad that the sun went down before I could snap some photos of some of my projects from this weekend.  You must stop back by and check them out later this week - I know you are going to love them as much as I do!  In the meantime, I wanted to finish plans for the Mod Modular Office Collection Project Desk. 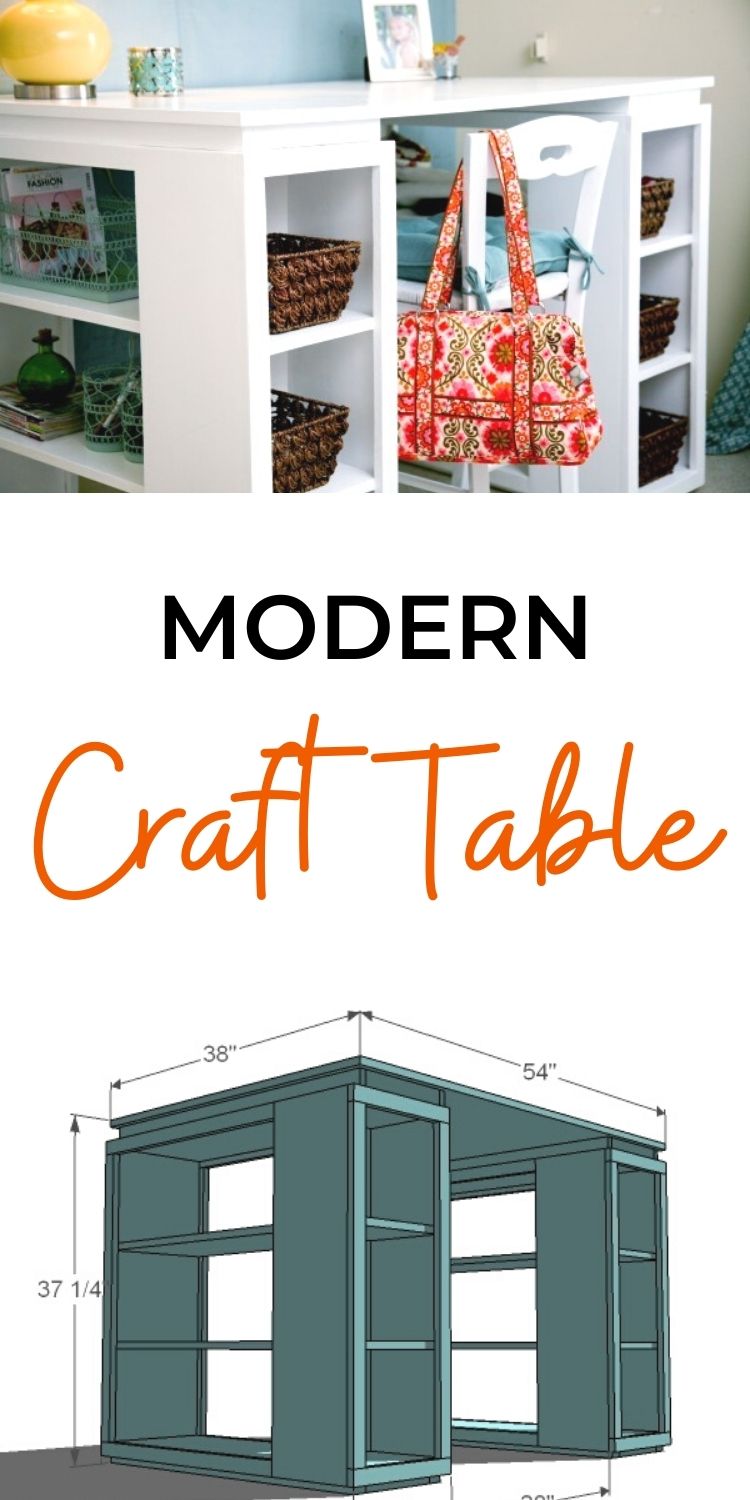 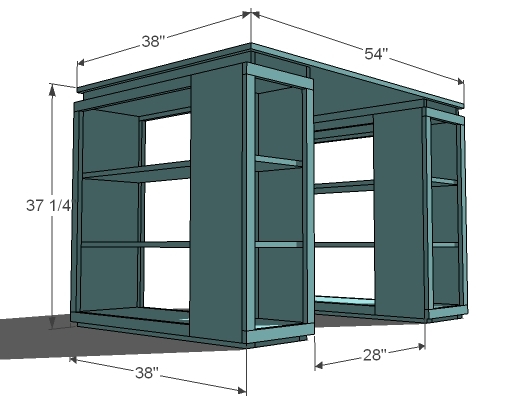 Overall Dimensions are shown above. 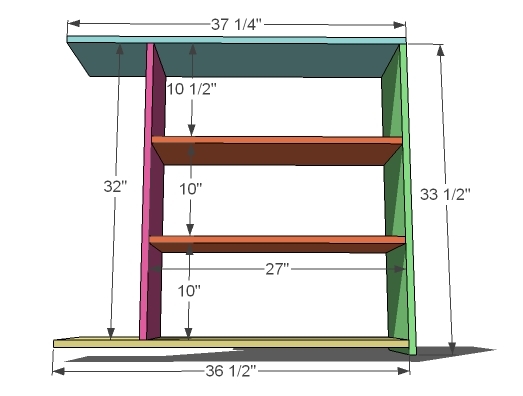 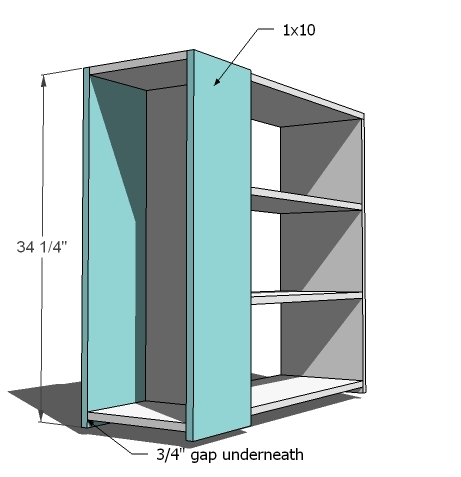 This is where that nailer would be handy. Attach with glue and 2″ finish nails the small bookshelf sides. Leave 3/4″ under the bottom and make sure you also attach to the center divider (Back of small bookshelf). 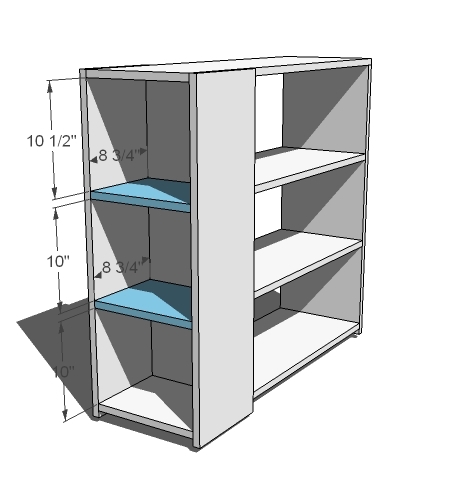 You can either place these shelves with shelf pins or use finish nails and glue to secure in place. 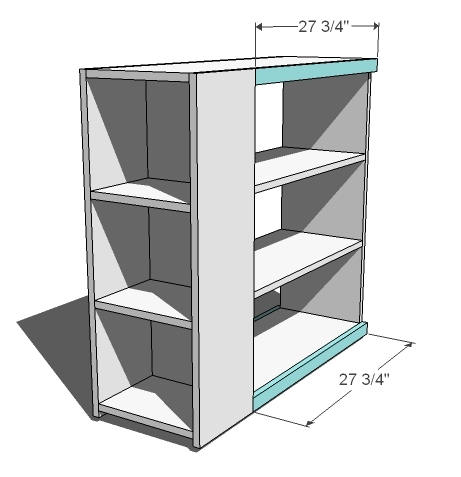 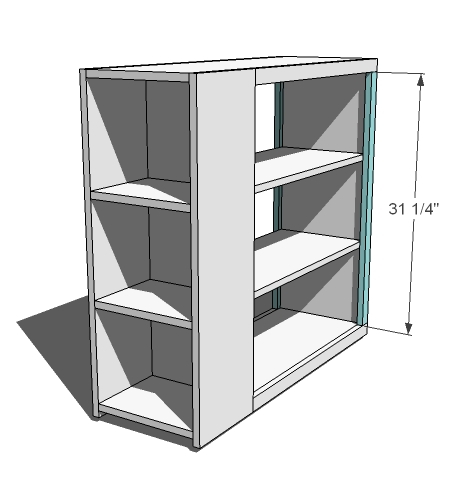 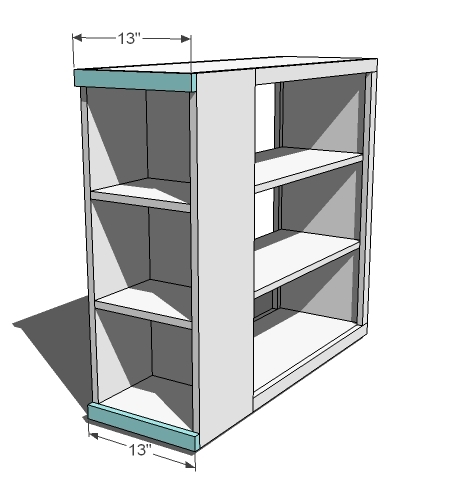 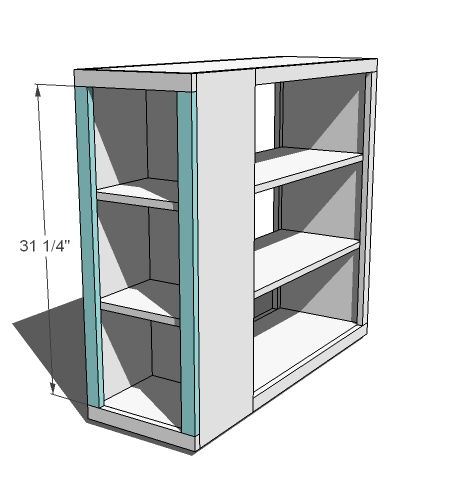 Attach the small shelf side trim with 2″ finish nails and glue. 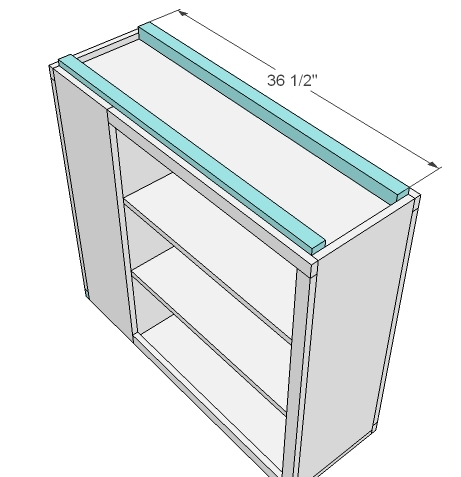 Use 2″ screws and glue to attach the floating base sides to the bottom of the bookshelves. 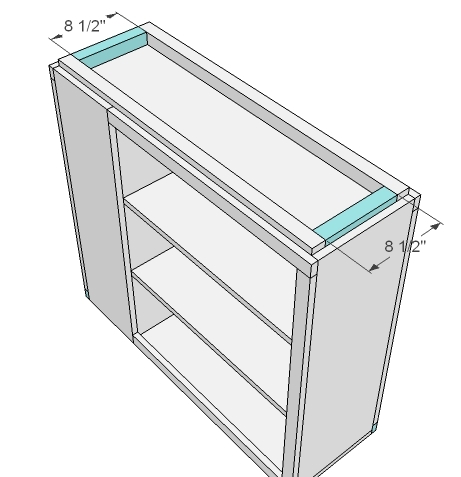 Attach the floating base ends to the bookshelf with 2″ screws and glue. 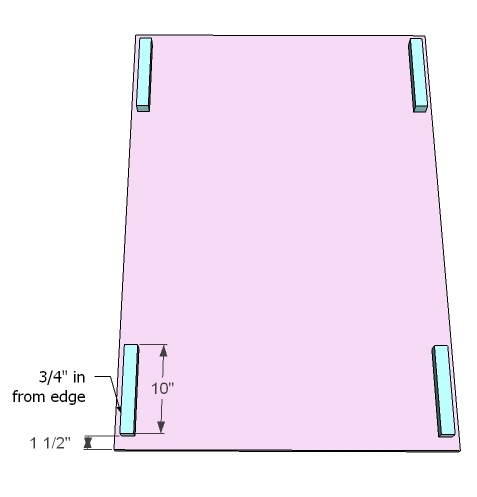 Use 2″ screws and glue to attach the floating base ends to the underside of the tabletop. See measurements above for placement. 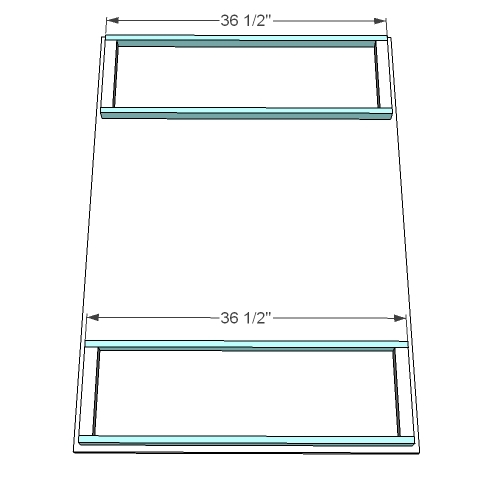 Attach the floating base sides to the ends with 2″ finish nails and glue. 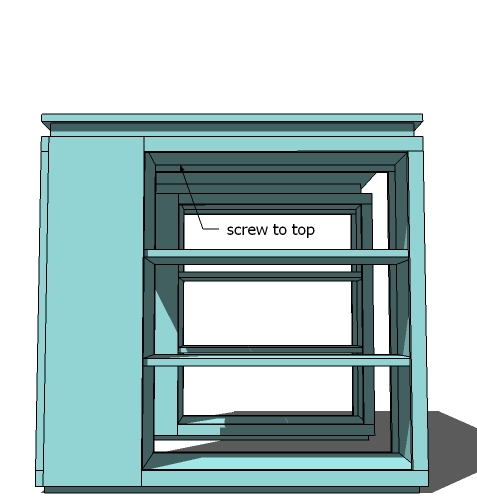 From the underside of the bookshelves, screw into the floating base with 2″ screws. You may wish to finish the edges of the tabletop with edge banding or nosing for a more finished look. Finish as desired.

Here is the error message.

I have wanted a large crafting table for awhile to make laying and cutting out sewing patterns and fabric easier than having to do it on the floor. I just finished this and it is so amazing. I had a great time creating it. I did substitute locking casters instead of the floating base so I can easily move it within my craft room for when I need some extra space. Thank you for sharing your plans. I will be making others as the plans are easy to follow.

I dont understand the shopping list section, I don't know if It's because I use metric, but i cant tell what's quantities and what's dimensions. Sorry to be a bother.

Do your own measurements and cutlist!!

I know this is an old post, but I just want to say BE CAREFUL with the measurements provided in this tutorial - not all of them are correct. For example, the 1x10 boards on the sides of the bookcases would not sit flush with one side or the other as written. She lists 8.75" for the small bookshelves, which works mathematically if you look at the other measurements such as the top and bottom boards. However, f you look at step 2, it says to use a 1x10 to cover the 8.75" space plus the side of the 1x12 divider board (3/4"). The measurement in the post doesn't make sense either way, but the ACTUAL size of a 1x10 is 0.75x9.25, and the ACTUAL size of a 1x12 is 0.75x11.25. So, as written, the 9.25" (1x10) board ends up 1/4 inch short since is has to cover 8.75"+0.75". It will either not sit flush with the outer edge of the small bookshelf or the divider - either way, not good. I double checked all the math on this and later saw that another reviewer had also mentioned this specific issue years ago. To resolve this issue, I am making the top and bottom boards as well as the small shelves 1/4 inch shorter each. I will adjust any other pieces as needed; I will need to work through each step slowly and not cut all my wood at once as I had originally planned.

You can use a cutlist tool online and/or make your own - I did not attempt to use the original list since I plan to modify these plans somewhat, but several people said they are wrong and at a glance, they look wrong. You will likely end up short on wood if you simply follow directions.

This looks like a beautiful craft table and I can't wait to build it. But, be very careful, do your own measurements, and don't waste valuable lumber. It's at a premium right now!!

I have what some may consider a crazy idea for a modification to this table. It would require either eliminating the shelves on the left or only having them more toward the back of the table so you can scoot over more to the left and have leg room). It would also require a thicker top.
The modification would allow people to have a customized sewing machine lift. I haven't sketched out the entire idea yet and figured everything out, but I saw the prices of the lifts and they were insane. But, for $20 you can get yourself an automotive scissor jack. You can get some cheap smooth metal rods to use as guides and make sure the platform (that extends to the sides under the table) has holes that the rods can go through to act as stabilizing guides. An alternative would be to make wooden boxes forming adjustable legs underneath with something to lock them in place. What I'm going for uses a cnc machine rail (metal rod welded to a flat piece with screw holes) and ball bearing glides. The jack can raise things about 14" (well, depending on the jack). You can put the glides on side or back (or both) to make the platform glide up and down smoothly. You can then attach some sort of hand crank to the jack to jack it up. In my case, I'm using an old wooden paper towel holder that broke. It was basically a wooden circle base with a hole in the middle for a 3/4" dowel. The dowel fell out of mine and I realized if I can use the center as the turning point and drill another hole off to the side, I can attach the dowel (after cutting it shorter) to the circle to make it work as a hand wheel crank. I also had a cheap silicone serving spoon with a hollow metal handle. Spoon part fell out and I found that the metal handle fits over the dowel like a sleeve and is loose enough to rotate.
Trying to figure out the best way to attach everything.

As for the sewing machine slot, I would have different insets that could go around the machine. If the machine is the same size at sewing level and at base then there would only need to be one for that. If it's smaller or larger would need a separate one if you wanted machine on top or slightly recessed so the surface lines up with the table. A solid piece could be put over when the machine is lowered all the way down-- leaving room to lay fabric out to cut and fold.

I hope this all made sense. 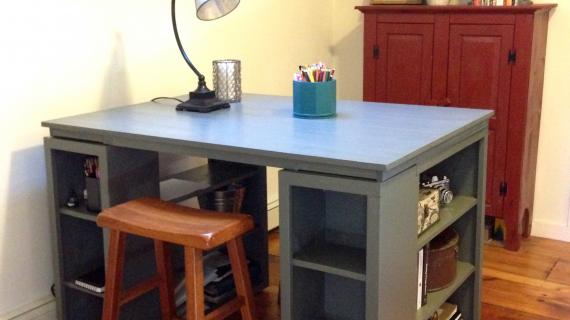 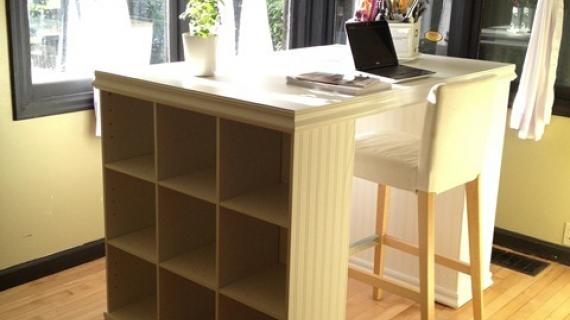