I've built a few of Ana's projects so far, and a couple of my own as well.  When I work on them, though, I've had to drag my saws and drills all over the house, and sawdust gets everywhere.  What I've needed, is a work-bench. 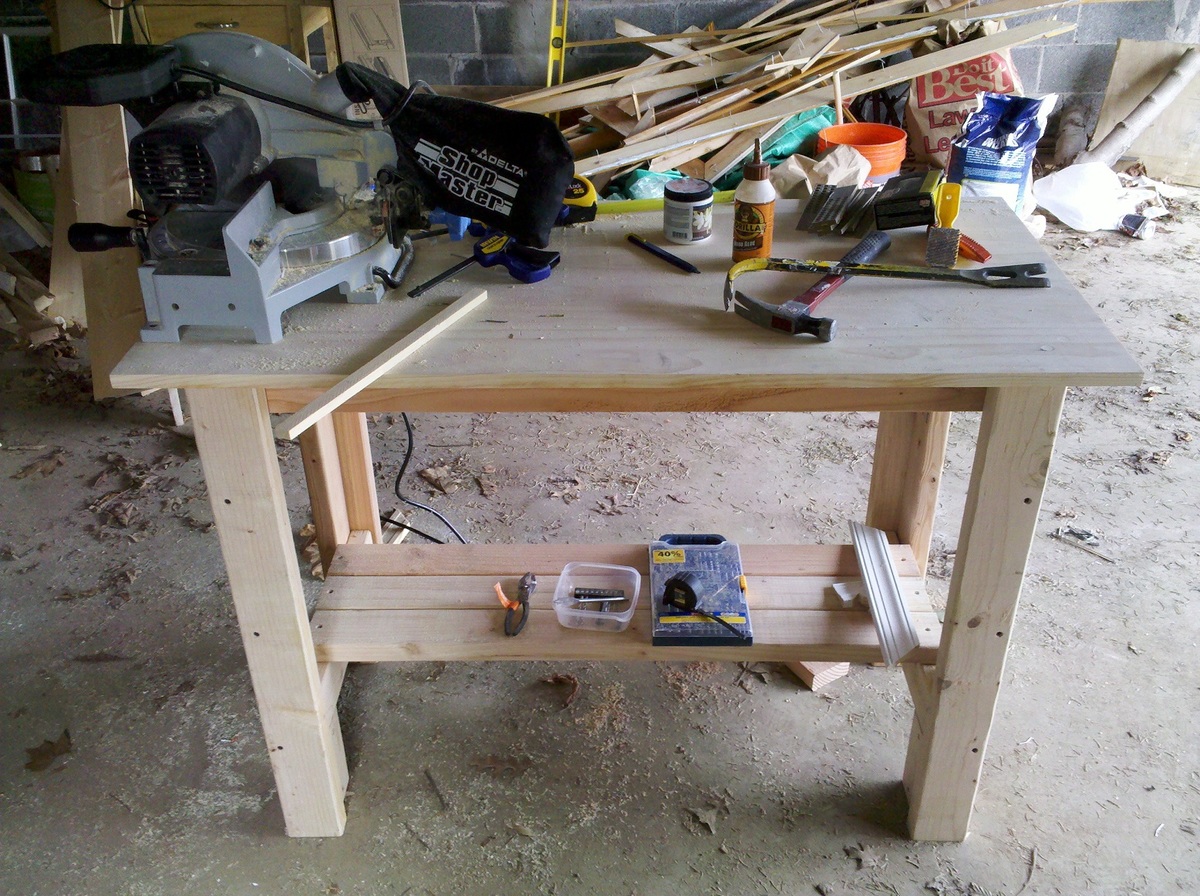 All of the cuts I've described use true-measurement 2x4s. If you purchase 2x4s that are in fact only 1.75"x3.75", the cut list will still work, but your base will contract by an inch in each direction. I've listed all the cuts as being made by a circular-saw. In fact, I used a miter saw and, if you prefer, you could use a simple chop-saw as well.

Next, cut a 2x4 into four sections, each three inches in length. Secure them to the bottoms of the legs using two construction fasteners to keep them in place.

If you'd like, you can skip this step. I find, though, that adding cleats to the bottom of the legs is helpful for three reasons: (1) because it's easy to make sure every cleat is the same size, it makes leveling the stretchers easy; (2) they support the stretchers better than screws would by themselves, and (3) they add surface area to the feet of the legs, which makes the whole project sturdier.

I knew that I would be using a 24"x48" top, and wanted a two-inch overhang on the front and back so, subtracting four inches for the legs, I cut my shelf supports to 16-inches each.

Next, cut stretchers to the same length as you chose for the shelves, and fasten them to the top of the legs.

Now add supports for the top. These should be four inches shorter than the shelf supports you originally cut so, in my case, 12 inches each. I've found, thus far, that four were sufficient to keep my pretty flimsy top secure but, depending on the material you use, you might prefer more (or less).

Space them evenly, and secure with two screws..

I added a 24"x48" top made out of laminated pine 1x2s from the Home Depot. They're cheap and, after I varnished it, reasonably hard. I was also in a bit of a hurry to get the project done, so speed and ease of construction were issues for me. I joined the top to the stretchers and supports with counter-sunk screws that I filled with wood-putty and sanded flush.

If you'd prefer, you can build a top yourself, in any of a number of ways. I considered using 2x4s joined to one another, but was concerned that the grooves would trap nails and saw-dust.

Another idea would be to stack three pieces of plywood on top of one another, cut to size. That would provide strength and durability that my flimsy one-inch top will ultimately lack.

Finishing Instructions
Preparation Instructions
This isn't a project that you'll want to display in your dining-room so, if you prefer, you don't have to finish it much.

The top, though, should be reasonably smooth and, if you used pine to top it, could stand some wood hardener. I filled the holes on the top with wood putty and then sanded them smooth. Once the top was wiped clean, I applied a coat of wood hardener, and then a single coat of water-based polyurethane.
Help Improve This Plan

I built/finished this bench in about 4 work hours about 4 months ago. Thank you so much I LOVE IT! Mounted my Kreg on one end, very handy. Finished the top with Johnsons Paste which is holding up great. This bench has proved to be VERY useful and was SO simple to build using your plans. Thank you so much for taking the time to post them!

I love this easy idea for making a cutting table in my sewing room. It would work well for storage underneath. I have this on my to do list and am going to skirt it in fabric. My dimensions will have to be a little different to match my cutting mat size.

I would love to know if anyone has built anything for a sewing room. Thank you for the plans and comments above.

I am going to take this on as my first project this weekend. Will report back with my success (or failure).

Thanks Anna for the inspiration.

My husband wants to make this

My husband wants to make this work bench, but since he's over 6' tall he wants to add about 3-4" in height. Does he need to modify anything else other than the height of the legs?

I just wanted to add that I

I just wanted to add that I just completed this project and only used 6 2x4x8 boards, no need for 9 of them. Depending upon where you purchase your 2x4's the price for them can vary greatly. I paid almost $4 a board and bought 3 more than needed, while the $12 dollar up cost doesn't bother me because I will use the 2x4's for another project at some point, some who don't build frequently and may have to save up for supplies could be upset by spending the addition cash when it isn't needed, just a suggestion is all. And also it is suggested to cut the top supports 4 inches shorter than the side supports and that is too short. I cut mine exactly four inches shorter and really only needed them to be 2 inches shorter. My table was built following these very instructions but I added a half an inch to the sides because I am using something different for my topper. My sides measure exactly 16 1/2" and the top supports need to be 14 inches so only 2 1/2" smaller than the side supports. 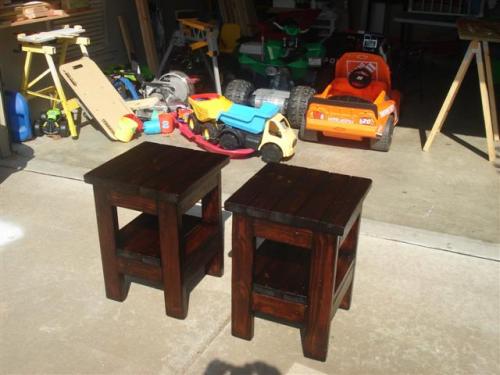 As the above comment mentioned, the TOP SUPPORTS may not be 12" as in STEP 7. Depending on the true size of your 2X4 this can vary greatly, so please do yourself a favor and measure the area before you cut! :) For me, the perfect top support came in at an even 13".

Also, as also mentioned above, this project only needs 6 2X4's to complete...with scrap left over. Oh...and you need 95 screws!

Very pleased with the sturdiness and raw design of this plan! I thank you, my garage floor thanks you, my back thanks you.

Fantastic article and that is one good looking work bench. Have you ever made a cutting board before? The ones at End Grain Cutting Board are beautiful and seem like an easy starter project for someone!

I just built this work bench today. The plans are easy to follow but the shopping list should be 6 2x4s instead of 9. Also there are some cuts missing from the cut list (step 7 cust are not on the list). Otherwise the plans are awesome and easy to follow.

Very interesting. During renovation, you need to consider important things such as materials, tools, safety and etc. We need to use something solid and reliable to avoid accident. Most individuals and companies are using cheap materials to lessen the costs of the renovation but this is not advisable.We must not only consider the price of the materials because the most important is the quality.

i made this work bench this past weekend. I modified it to make it taller, wider, and shorter in length to be able to use it for my cut table in my quilting studio. I haven't finished it yet (plan to paint the bottom and stain the top) but it is wonderful. Chunky and sturdy and my back loves, loves, loves the height! Oh, I also lowered the bottom shelf a tad and added another shelf. Once it's finished, maybe I'll add a picture. Thank you Ana for your wonderful plans! 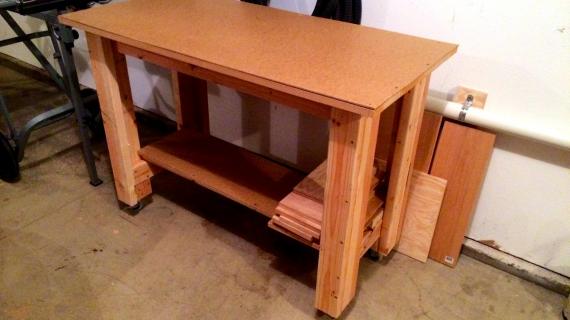 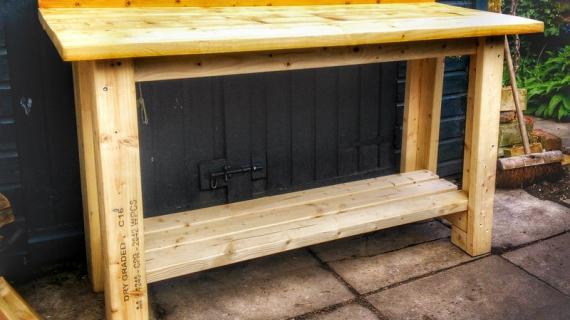 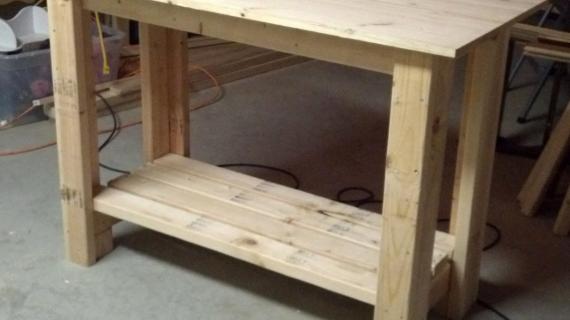 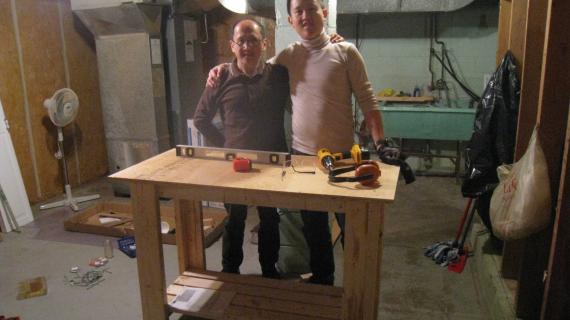